The rise and fall of good and evil in "The Play" 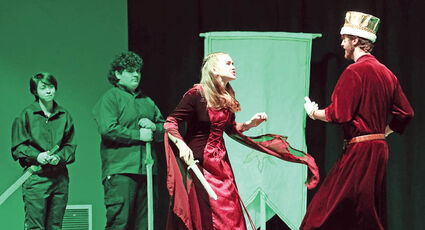 SEELEY LAKE – Thursday, March 3 the Seeley-Swan High School Drama Class took to the stage for the debut of "The Play." SSHS Senior Oskar Murphy wrote the production which he helped direct along with senior Crystal Lopez and Drama Teacher Katy Pellett.

The production opened in the throne room of King Eildue (Oskar Murphy). His kingdom had been attacked. While Prince Freddrich (Tyler Neher) was eager to fight, he was not of age. King Eildue threw him in the dungeon for his over-zealous defense of a "deserter" named Willmus (Cheyenne Gifford).