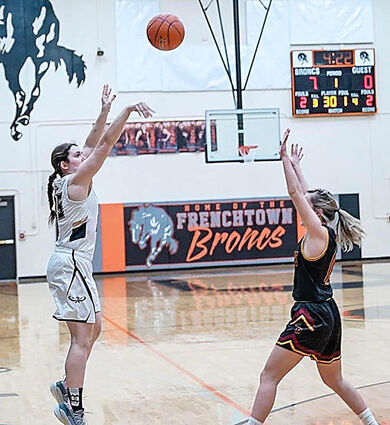 Senior Tegan Mauldin takes a three-point shot early in the game against West Yellowstone Feb. 24. She was voted Missoulian's Prep Athlete of the Week after her performance at Divisional Tournament Feb. 24-26.

SEELEY LAKE - Seeley-Swan High School Senior Tegan Mauldin was voted the Missoulian's Prep Athlete of the Week March 2. Mauldin tallied 44 points over four divisional basketball games in Frenchtown, including 16 in a loser-out game and 12 in the third-place game, both team highs.

Mauldin did not starting playing basketball at Seeley Lake Elementary until junior high.

"I didn't want to be in front of people, that was terrifying," Maudlin said.

She decided to go out for the team in seventh grade because of a guy she liked. Through the support from friends, family and staff at SLE elementary...