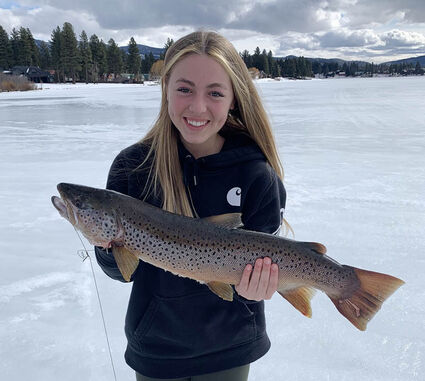 Dani Sexton, 17 of Seeley Lake, with her 27-inch, eight pound brown trout that she landed March 4 on Seeley Lake.

SEELEY LAKE – Even though the day ice fishing on Seeley Lake started slow, things picked up when Dani Sexton, 17 of Seeley Lake, and her friend Tristan Whitney of Missoula hooked into an eight-pound brown trout Friday, March 4. Caught on a tip-up baited with smelt, the pair expected a nice pike but instead pulled up the 27-inch trout. While Sexton enjoys fishing in the summer, she does not care for the cold so she rarely goes ice fishing. She said Whitney is an avid fisherman and hunter. He brought his ice fishing gear.

While two of the tip-ups worked well, the line was messed up on the third. Even though it only went down about half way, Sexton said they decided to put it out anyway just in case.

"We didn't want to sit there in the cold and fiddle with it a bunch since our hands were already cold," Sexton said.

After about a half hour of no action they were getting bored. They were about to pull them out when the flag on the tip-up with the messed up line went up. They went over to it and Sexton grabbed the line.

"It was pulling really hard, so we were like it is probably just a big one," Sexton said. "We started pulling it up and then we saw the body and were like 'Oh, it is just a big pike.'"

After fighting it for around 10 seconds, they landed it. It was then they realized it was a brown trout.

"It wasn't really fighting," Sexton said. "When it came out we could barely hold it up...me and him were both shaking. It was just crazy."

Sexton said this was her largest trout and probably her largest fish ever. While Whitney has caught larger fish, this was his largest brown trout. He took the fish home and told Sexton he was going to either eat it or mount it.

"It was just fun," Sexton said. "It took me by surprise because I didn't think we were really going to catch anything that day. We were like this is probably the biggest one we were going to catch so we might as well be done."