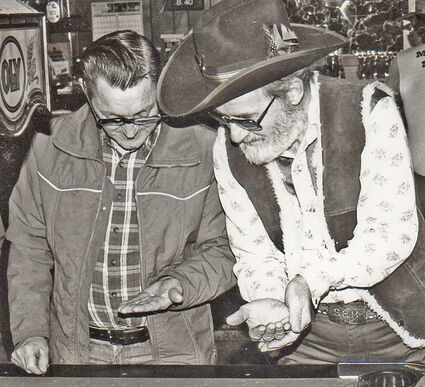 As of March 7, the U.S. Postal service has been serving the Seeley Lake area for 75 years, according to Dennis Nemmers, Postmaster.

Nemmers recently received a letter from an Iowa collector requesting that a letter be postmarked March 7 in honor of the 75th birthday, and when Nemmers checked the records, he confirmed that, indeed, the postal service has been serving this area since March 7, 1912.

The Post Office was originally established as Corlett, near where Morrell Creek now crosses Highway 83 south of Seeley Lake.

According to Bertha M. "Bert" Sullivan, postmaster at Seeley Lake from 1949 to 1970, the site of the Post Office serving the Seeley Swan area moved around over the years. First it was established at Corlett. By 1918, according to records, the Post Office was renamed Seeley Lake for J.B. Seely, the first white man to live in this area (after whom the town was named).

From Corlett, the Seeley Lake Post Office was moved north on the Clearwater River, where Oscar "Pop" Miller was postmaster for a number of years. Later, what is now known as Wapiti Lodge housed the area Postal Service, then known as Otter's Resort. Mr. Otter was postmaster then, according to Mrs. Sullivan.

Finally, the Post Office moved to what is now the townsite of Seeley Lake. Mr. and Mrs. Jim Sullivan operated Sullivan's store, which was the next site of the Seeley Lake Post Office.

"It was a little square in a back corner of the old store... about four feet by six feet, I think. There was a window there, and orange crates to put mail in. Everybody up the Swan had their own "mail sack" and they hung them out on posts for the route driver."

The Seeley Lake Post Office has served the 40-mile long Seeley Swan "route" for nearly all of its 75 years. Jesse Perro Dombey was the route driver for many of those years. The following is an excerpt from her booklet, Star Route.

"When days were hot, rainy or windy, doors were opened to me and a friendly hand extended. When the temperature dropped to 50 degrees below zero, cups of steaming hot coffee greeted me at many stops. Hot lunches, roaring fires and best of all, the window's warmth of friendliness was unstintingly extended by these fine STAR ROUTE patrons."

Residents of the Seeley Swan Valley will enjoy a new self-service, three bay auto/tuck wash by the end of May if developers' plans go according to schedule.

The Grim Buster Car Wash will be constructed beginning late this month on Highway 83 at the intersection of School Lane, near the Seeley Lake Elementary School, according to developers Doug Hadnot and Don Larson.

"We are building a state-of-the-art car wash with every feature available in the most modern car wash in Missoula," Larson said. "We hope to make heavy trucks a large part of our user market."

The Third Annual Maggot Races held last weekend in Seeley Lake were a huge success, according to Victoria Burns, one of the organizers of the event.

"We even went international this year," she said, pointing out that one contestant hailed from Denmark. "He's living in Montana to learn how to fly planes," Burns explained.

Annette Cleary, Swan Valley, was this year's Champion in the Magathon, and was obviously thrilled about this year's event, saying that she would be back to defend her title next year.

"I wouldn't miss it for the world!"

Cleary, member of a four-man racing team sponsored by Liquid Louie's of Condon, broke two records with her maggot, Banner Blue 50. The W.O.R.M. (World Organization of Racing Maggots) World record was 44 seconds. Banner Blue 50 had times of 41 and 40 seconds in two of the heats...

Many of you have seen two wolves that seem to be working the Clearwater drainage between Seeley Lake and the Game Range. We've received reliable reports from folks who have seen the wolves this winter in Blanchard Creek, feeding on roadkill near the Seeley Lake Cemetery, and crossing Salmon Lake.

As you know, the gray wolf is federally protected in Montana under the Endangered Species Act. In the part of Montana that is located north of Interstate 90, Interstate 15 and the Missouri River (that is, Seeley Lake and Condon), the wolf is protected under the most stringent terms of the Act. Generally, the wolves that occur in our area have expanded naturally from Canada and Glacier National Park. 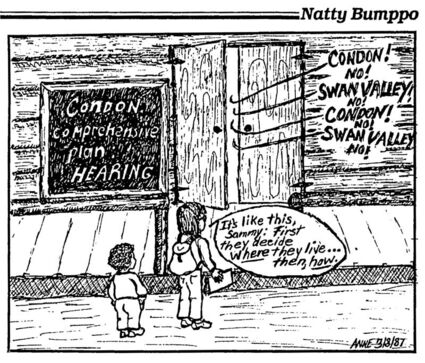 The wolves that were reintroduced "by the hand of man" to central Idaho and the Yellowstone Ecosystem are classified as "non-essential experimental" populations, which allows more flexible management options under the Act.

Recently, I had an opportunity to visit with Joe Fontaine, one of the biologists working on the wolf recovery team for the US. Fish and Wildlife Service. He, too, is aware of the wolf sightings around Seeley this winter, and is planning to send a field team out to investigate. One of the things that he is interested in investigating is the possibility that these wolves are actually hybrids that have escaped or been released from captivity...

To read more of this article and the rest of the issue visit https://www.seeleylake.com/home/customer_files/article_documents/2002-03-14.pdf