Jokers return to the streets 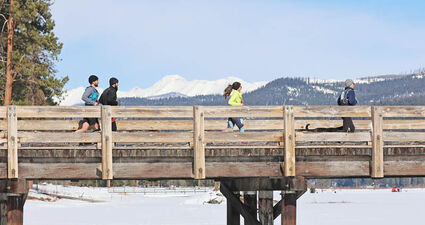 Snow Joke runners (L-R) JD Schmidt, John Mills, Brittany Katzer and Hannah Nyrop with canine named Blue cross the bridge over the Clearwater River on the south end of the Seeley Lake during the Snow Joke Half Marathon, Feb. 26.

SEELEY LAKE – With the sun high in the sky and temperatures reaching into the mid-20s Saturday, Feb. 26, runners returned to the traditional course for the 43rd annual Snow Joke Half Marathon around Seeley Lake. While the field of 350 racers was primarily from Montana, the footrace also drew runners from Idaho, Illinois, Missouri, Utah, Washington and Wyoming. With only a few local racers, this year's winner Layne Ryerson and brother Clayton spent summers in Seeley Lake as youths.

Running in the Seeley Lake area is nothing new to the Ryerson family. While they claim Helena as their home...