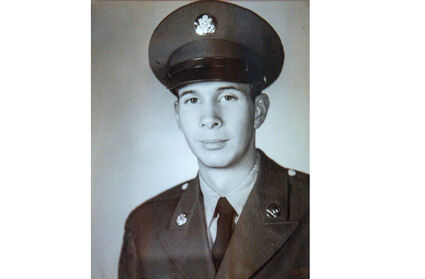 Dennis Jette after graduating from boot camp at Fort Ord.

SWAN VALLEY – In 1957 Dennis Jette was working road construction, helping to build the Condon section of Highway 83. By the following year he was making enough money to get a new 1958 Ford Convertible with a retractable top. He only had one payment left to make on the car when he got drafted into the United States Army in 1959.

Knowing he wouldn't be able to make that last payment, Jette went to Missoula to talk to the dealer who had sold him the car. The two worked out an agreement. The dealer would take back the convertible. When Jette got out of the Army, the dealer would sell him a new car with only a final payment due.

Jette commented, "That was back in the day when military guys were respected and people tried to help them out."

Jette took his basic training at the Fort Ord Army Post in Monterey Bay, California. In fact, except for a 30-day training course in Yakima, Washington, Jette's whole military service was based at Fort Ord. That was fine with him; he had never seen the ocean before.

Directly out of boot camp Jette was selected for the military police (MP). His training included weapons instruction emphasizing pistol marksmanship and formal karate instruction as well as general coaching in how to handle himself in various situations.

Whatever prestige Jette may have associated with being an MP was quickly dispelled when his first duty turned out to be directing traffic.

"That was standing out in the intersections at noon and at five o'clock," Jette said, "and directing traffic with hand signals. I'd stand out there for two to three hours at a time."

He added, "Then I got a few stripes and went out on town patrol."

The main towns he patrolled were Salinas, Monterey and Santa Cruz. He described Santa Cruz as "a hot spot for young people." Jette said, "There were always soldiers around the boardwalk area. You just drove around. And if there were any soldier or military personnel there and they didn't have all their uniform on or it was all unbuttoned or something you talked to them. Then you drove around the block a few times and if you saw the same ones [in disarray] you threw them in the back of the car and they went to jail at Fort Ord."

Jette particularly recalled the times Willie Jones rode patrol with him. Jette described Jones as a good partner and a Black man with big muscular arms.

"He'd see a soldier with a necktie hanging down or something," Jette said, "and he'd be out of the car. If [the soldier] didn't put that thing on right, Willie whacked him with his nightstick."

Not all patrol duty was as mild as chastising "out of uniform" soldiers. Jette recalled one night when a fight broke out at the soldiers' club. He and Jones handled that and then got a call there was trouble at the officers' club at Fort Ord. They raced back, siren blaring, and found another fight in progress.

"I mean, they had knives out," Jette said. "We got in there and old Jones he was whacking with his nightstick. I had mine out too. One guy turned around at me with his knife. I drew my pistol. We were taught, 'Don't draw your pistol–because it was loaded-unless you're going to use it.' But I drew it and pulled the hammer back. I was ready to shoot him, but he backed off. About that time, Jones hit the guy with the stick and knocked him out. I dreamed about that for a couple of weeks."

Initially Jette had to rely on friends with cars if he wanted to visit more of California. But through a fortuitous coincidence, he managed to get a car of his own. He was off-duty when a buddy on patrol alerted him about a soldier whose car had broken down in Laguna Beach. He had no way of fixing it and wanted to sell it cheap. Jette asked for details and the buddy said it was a 1950 Mercury "all decked out and hopped up." Apparently the fan had broken off the mount and fallen into the radiator. Jette and the buddy drove out to look at it and talk to the owner who said he'd sell the car for $40. Jette jumped on that offer. He and another buddy managed to haul the Mercury to a garage where the mechanic was able to fix it. Jette didn't remember exactly, but he figured the repair only cost about $60.

"You can't hardly buy a tank of gas for that now!" Jette added.

Having a car allowed Jette a lot more freedom. For one thing, he could drive to Santa Cruz in something besides a patrol car so he could take girls out. Jette also recalled a couple of visits with his aunt in Oakland and he looked up a great uncle in Santa Barbara. His mother was very excited, Jette said, when he called home to get Uncle Barney's address and phone number. What he remembered most was that the great uncle had a freezer full of TV dinners, a novel item for Jette. He said that was the only thing Barney ever fixed for dinner.

That same great uncle drove him down to Los Angeles to visit with another aunt and uncle on his mother's side. Jette said he later visited them again and they took him to the San Diego Zoo. He said, "That was something for me to see!"

On another visit they took him to Pacific Park, an amusement park on the Santa Monica pier that featured a huge Ferris wheel offering a view of the California coastline. He said they went there two nights in a row.

"So I had a good time when I was down there [in California]," Jette said.

Nevertheless, Jette was eager to get back to Montana and was not even tempted to re-enlist when his two and a half years of military service ended. 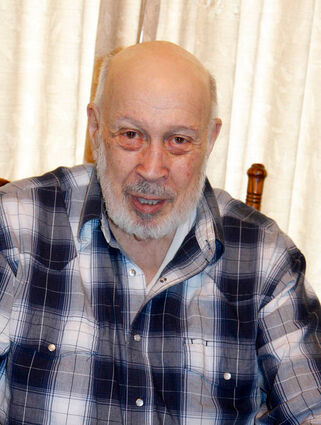 Toward the end of his military career, Jette partnered with the California Highway Patrol (CHP). That connection took him over a larger area of California, since the CHP had jurisdiction through a couple of different counties. He felt he gained a valuable education during that time. When his military term was up, he considered applying for a job with the Montana Highway Patrol. When he found out the pay was low and the officers were expected to buy their own uniform and weapon, he realized he just couldn't afford to do that.

Instead, Jette went to work at Gray's Mill north of Seeley Lake. Eventually he moved into other logging jobs, driving a skidder and other vehicles associated with the lumber trade.

Jette also went back to the car dealership where he had returned his convertible. He bought a brand new 1962 Buick Skylark. True to his word, the dealer sold him the car with only one final payment due.