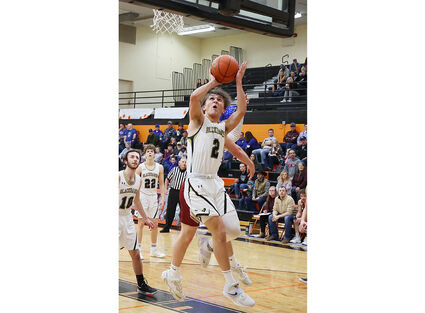 Junior Sean Mercado puts in a basket in the consolation game. He scored 20 points against Granite.

FRENCHTOWN - The Blackhawks put up a great fight at the 13C District Tournament but in the end fell just one basket short of extending their season to the divisional tournament.

The Blackhawks defeated Granite 63-46 in their opening game Feb. 17 before falling to Darby in the semifinal 56-74.

In the consolation bracket the Blackhawks faced Valley Christian Feb. 19. By half time the Boys looked like their season would be ending sooner than later as they trailed 15 points. They clawed their way through the third quarter shaving their debt to 10 point and then outscored Valley 19-6 in the fina...