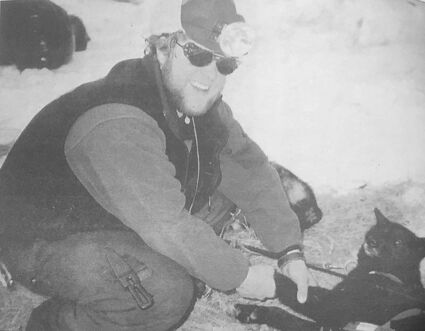 Jim Gallea helps with the dogs during preparations for the start of the Seeley Lake 100.

The general enthusiasm for building a ski resort on Mt. Henry leaves me with a deep paranoia. While others are happily imaging schussing down the slopes and getting an economic boost for Seeley's winter economy, other visions crowd my mind. I imagine Seeley Lake 2007 A.D. as stretching from the Taco John's at Morrell Flats to the Motel 6 at the Mt. Henry turnoff. Seeley Lake, the longest and skinniest town in Montana: "10 miles long and 100 feet wide."

The Pathfinder's report in the Feb. 12 issue on the Mt. Henry meeting soothed some of my fears. Porterfield's recommendations for creating a small, family-oriented ski area catering toward Montanans sounds like Seeley's style. Maybe the condos aren't coming. Maybe growing up in Colorado amidst the big bucks, high-tech ski industry that is now "sick" has left me too jaded.

The Pathfinder ended the story with questions as to who would conduct and finance the needed environmental studies. I accepted the challenge last Saturday morning. Let me be the first to submit an environmental impact study.

As I drove through Morrell Flats on my way into town, I noticed that the plume of smoke from the sawmill's boiler rose upward and hit an invisible barrier stretched across the Valley. Unable to break through, the smoke ...

To read more of this article and the rest of the issue visit https://www.seeleylake.com/home/customer_files/article_documents/1987-02-26.pdf

Another effort is underway in Condon to set up a volunteer fire department, according to one of the organizers Paul Swinson, Swan Valley. The group met Wednesday night at the Rustics office in Condon to finalize their plans. Training sessions will begin next week and continue for five weeks. (There will be two, three-hour sessions each week). The group is being assisted with training by the Seeley Lake Volunteer Fire Department. Those interested in volunteering should contact Swinson at 754-2222.

Swinson said that the group plans to hold a fundraiser later this year and to eventually build a firehouse. Plans have also been made for the acquisition of firefighting equipment

To read the rest of the issue visit https://www.seeleylake.com/home/customer_files/article_documents/1987-02-26.pdf

On March 2, Jim Gallea (pronounced Gally), a 21-year-old musher from Seeley Lake, will begin his trek across the interior of Alaska to run the Alaskan Iditarod. He will drive his 16 brave Alaskan Huskies the two million dog strides it takes to run from Anchorage to Nome. They will join the approximately 1,000 dogs and 63 mushers also making the 1,100-mile journey.

Gallea, of course, doesn't have any illusions he will win but he has lofty goals. He hopes to finish in the top 20.

He comes to the sport naturally. Gallea's family owns and operates Snowcrest Kennels of Seeley Lake. His Father, Bill, an emergency room physician, ran the Iditarod in 1996, coming 41st with a time of 13 days, 7 hours and 14 minutes.

The fastest the course has ever been run is nine days and 48 minutes, a time set last year by Doug Swingley of Lincoln, Montana...

To read more of this article and the rest of the issue visit https://www.seeleylake.com/home/customer_files/article_documents/2002-02-28.pdf 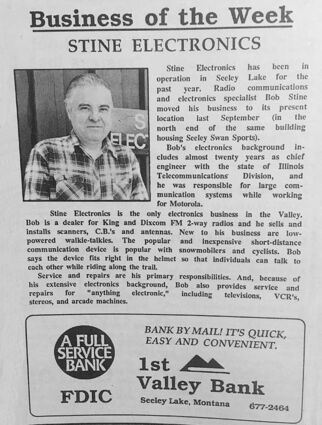 A record 189 entrants in the 23rd Snow Joke Half Marathon completed this annual 13.1 mile footrace around Seeley Lake held Saturday, Feb. 23 in a snowstorm. The previous record number of finishers was 156 in 1998.

Brandon Fuller of Missoula was the overall winner in a time of 77 minutes, 51 seconds, closely followed by Calamity Seeley of Polson in 78:30. The first place woman was Mariann Foster of Lodgegrass in 89:38.

In the 40 and older division, Jeff Foster of Lodgegrass was the leader in 78:37. Elizabeth McGoff of Bozeman, who also won her division last year, posted the leading time of 98:08.

To read more of this article and the rest of the issue visit https://www.seeleylake.com/home/customer_files/article_documents/2002-02-28.pdf