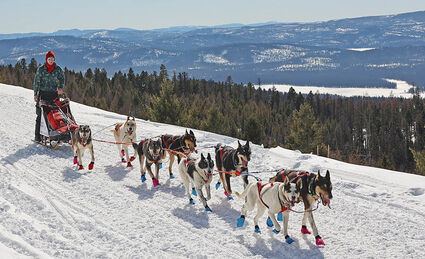 Josi Thyr, 28-year-old musher from Olney, Montana, nearing the top of Rice Ridge early Sunday afternoon. Thyr took second in the 300-mile Race to the Sky finishing Monday night at 11:08 p.m. with eight dogs. She was four and a half hours behind winner Jessie Royer.

With a slushy start and temperatures in the high 40s Saturday, Feb. 12, Seeley Lake musher Jessie Royer took an early lead in the 300-mile Race to the Sky and never gave it up. First to all the check points, she returned to Lincoln Monday night just after 6:30 p.m., more than four and half hours ahead of second place Josi Thyr of Olney, Montana.

Rounding out the top three was Cindy Gallea, a musher who started her racing career in Seeley Lake in 1991 and now lives in Wykoff, Minnesota. Gallea plans to retire from racing, making this her final Race to the Sky.