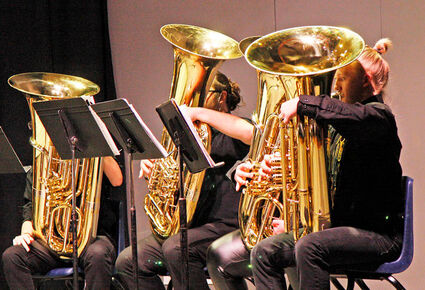 Four of the seven tuba players are dwarfed by their huge instruments.

SEELEY LAKE – The overhead stage lights of the Seeley-Swan High School auditorium bounced off the bronze cone-shaped bells of seven tubas and five euphoniums Feb. 13 as University of Montana Euphonium and Tuba Consort performed for a crowd of more than 40 people (on Super Bowl Sunday!).

According to Conductor Benedict Kirby, a tuba has a five-octave range, starting lower than the sound a piano can play. Its smaller cousin, the euphonium, starts an octave higher and has a four and a half octave range. The low tones are well suited to solemn arrangements such as Franz Biebel's "Ave Maria"...