Curiosity and nonsense prevail in "Alice in Wonderland" 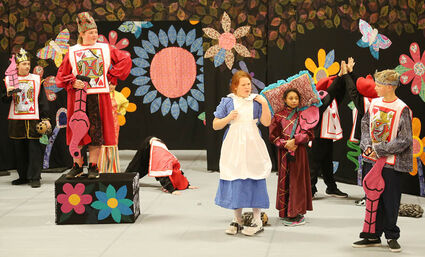 Middle Alice (Brittney Kelley) explaining to the Queen of Hearts (Grace-Marie Neher) that she did not steal the sugar tarts during the Missoula Children's Theatre production of "Alice in Wonderland" performed at Seeley Lake Elementary Jan. 14.

SEELEY LAKE – Friday, Jan. 14 more than 50 Seeley Lake Elementary students took the stage for the Missoula Children's Theatre production of "Alice and Wonderland," an original adaptation based on Lewis Carroll's "Alice's Adventures in Wonderland" and "Through the Looking Glass."

Alice, played by Brittney Kelley, Lili Young and Addison Ott, was filled with never-ending curiosity. Her curiosity grows as she follows a White Rabbit (MCT Tour Actor/Director Julia Walsh) into a land of wonder and adventure.

In Wonderland, Alice meets several characters, makes new friends and is forever searching for where she is and who she is. She heads to the Queen of Hearts' (Grace-Marie Neher) croquet match to get help putting Humpty Dumpty (Lilly Evenson) back together again.

Before she could even ask for help, Alice was accused of stealing the sugar tarts. She in turn accused the Knave of Hearts (Elliot Morgenstern) and was allowed to plead her case. After hearing her testimony, the Queen and everyone at the match chanted "Off with his head."

Alice questioned this harsh sentence. Instead she asked the Queen if it wouldn't be just as easy to say, "I forgive you."

The entire cast of MCT's "Alice in Wonderland" takes the stage for the final song Friday night. The end of the song was met with thunderous applause. The production was filmed live and can be viewed on the Seeley Lake Elementary School's Facebook page.

"Come on give it a try, what have you got to lose," Alice said. "Just believe and try really hard."

This not only helped reunite the Queen's family but also got rid of her nagging headache. She happily helped Humpty Dumpty.

Alice returned home appearing to wake up from a dream. She told her sister Margaret (Gabby Andell) of her wild adventures while they enjoyed the sugar tarts Margaret had made.

The hour-long production came together in five days. Students auditioned on Monday and practiced after school. Tour Actor/Director Stephanie Jeker said this is MCT's 50th year and they work with 650,000 children each year. In addition to those onstage, Virginia Arroyo, Bella Dehm, Kailey James and Emerick Bradley were Assistant Directors helping with sound, lighting and lines backstage and Sandra Abbott was the accompanist.