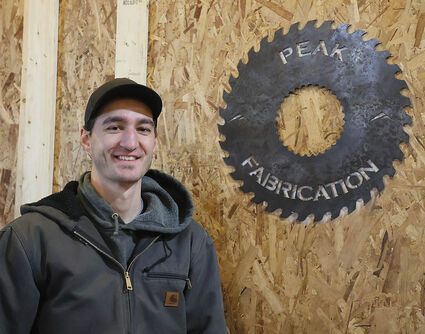 Peak Fabrication LLC sole proprietor Cole Henrekin. The old saw blade was from Pyramid Mountain Lumber. Michael Sexton gave it to Henrekin when he was in 4-H in junior high. Henrekin was going to use it to make a knife however he quickly realized the steel was too hard. It has been hanging up at his parents' house until he cleaned it up and put his logo on it.

SEELEY LAKE – When Cole Henrekin graduated from Seeley-Swan High School in 2014, he went to Montana Technological University for mechanical engineering. After three semesters he realized he did not want to be an engineer. He switched from a bachelors degree to an associates degree in metal fabrication and welding, something he had always wanted to learn, and graduated in 2018.

"It was probably the best decision I made in school," Henrekin said.

"Even though all of this is steel and welding, and it is dirty, messy, hot and weird, it is really art," Henrekin said. "I just want to be able to put out the best quality of product that I can and have my customers walk away with a custom piece of artwork."

Henrekin has always been interested in making things and it was something that came naturally. At SSHS he took woodshop but was never able to take welding due to schedule conflicts.

"Welding was always something I wanted to learn and ... it was kind of the next frontier," Henrekin said.

While the math and physics required for mechanical engineering came easily, Henrekin quickly learned he didn't want to work behind a computer in an office. He took a semester off to decide what to do.

"I was 19 years old and I didn't want to get stuck in a job I'm going to hate until I retire," Henrekin said. "I decided to change to something I wanted to learn."

Henrekin transferred into the Highlands College of Montana Tech in Butte, Montana two-year metal fabrication program. His first year he learned machining. He manually worked with metal as well as learned how to program CNC machines to operate lathes and mills to cut parts.

The second year was welding.

"I just spent a lot of time under the hood learning how to weld," Henrekin said. "It was fun. I took it to it pretty natural."

He graduated in the spring of 2018 with an Associates Degree in Applied Science in metal fabrication from Highlands College of Montana Tech. He also earned two certificates in machining and two in welding.

Henrekin moved to Bozeman in the fall of 2018. He worked for 4 Corners Welding for just over two years. He became the lead handrail maker in the shop for projects all over the Gallatin Valley, at the Yellowstone Club and Big Sky.

While he enjoyed it, he and his fiancé at the time KeAnna Conley wanted to return to the Swan Valley. They both knew how much opportunity there was in the Seeley-Swan for young people that wanted to work but he was not sure exactly what he would do.

When Henrekin told his good friend Christian Cahoon that he was moving back, Cahoon encouraged him to reach out to Seeley Lake resident Dan Woods. Woods had a lot of projects he could do and he offered to rent Henrekin part of his hanger to operate a shop.

"My boss [at 4 Corners Welding Jeremiah Hillier] was actually the kick over the ledge to come do this," Henrekin said. "He was the one that pretty much convinced me to come take a hold of this opportunity and run with it especially since we wanted to move back here."

Henrekin opened Peak Fabrication LLC in January, 2021. When he moved back to the Swan Valley in April 2021, he opened his shop in Woods hanger at 175 Frontier Drive, Seeley Lake.

He and his wife KeAnna came up with the name.

"I wanted to have a creative name [with a mountain theme] that I could stick a logo behind," Henrekin said.

"Things that go in the house but do not hold the house up," Henrekin said.

Henrekin works on a STV®CNC plasma cutting table with a 5 foot X 10 foot cutting area and water pan. The water pan holds 110 gallons of water to catch the metal slag, sparks and significantly reduces the dust. He can cut up to a half an inch of steel efficiently and provide a high quality product. As long as the project can fit through a standard garage door, he can build it.

Henrekin does all his own design work on InkScape, the creative part of metal fabrication he enjoys most.

"Like my old boss Jeremiah told me, 'I can teach a monkey how to weld, it is the creative fabrication that takes time for people to learn,'" Henrekin said.

Henrekin then brings the design into My Plasma CNC to cut out the project on the table. He invested a lot of time experimenting and watching YouTube videos when he first purchased the equipment.

"I just wanted to be able to use that to its maximum potential," Henrekin said. "It is a pretty user friendly situation." 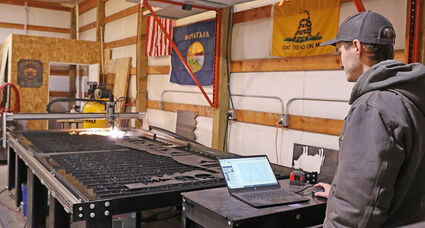 Cole Henrekin cutting out a part of a wind chime on his STV®CNC plasma cutting table. In addition to projects for individuals, he made an archway at NatureScapes that is outside their greenhouse and made the sign for the Veterans Memorial on Highway 83. The Veterans and Families of Seeley Lake purchased the steel but Henrekin donated his time and equipment. "Anything I can do to help out with that and what they have done for us, I think it is the right thing to do," Henrekin said.

"I try to avoid painting as much as a can because I'm a welder not a painter," Henrekin said. "I don't have the room or the ventilation to do it."

Peak Fabrication will be at the Cabin Fever Market Feb. 11 and Feb. 12 at the Kalispell Fair Grounds and looks forward to participating in the Seeley Lake Market this summer. Peak Fabrication can be found on Instagram @peakfabrication and will have a website soon. To set up an appointment call 406-210-1884 or email peakfabricationllc@gmail.com.

"The best educational decision I made after high school was ditch the expensive four-year degree and I went and got a USEFUL, accomplishing two-year degree for a fraction of the cost," Henrekin said. "The majority of business owners [my age] that I know developed a practical skill, and then went out and made their business by applying those skills. Learn a trade, get a CDL, find a niche in an industry or do all three and run with it."