Offering comfort to dying patients and their families 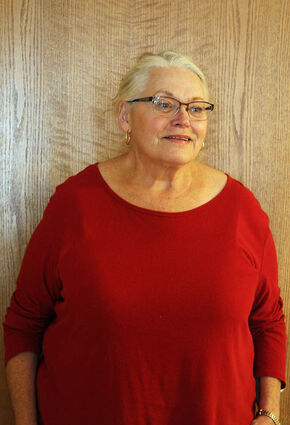 Laurel Deniger has served as a hospice volunteer in the Seeley Lake, Condon and Potomac areas for 22 years.

SEELEY LAKE – The first thing the woman asked when Partners in Home Care Hospice Volunteer Laurel Deniger came for an initial visit was "Do you give foot massages?"

So every week when Deniger visited, she massaged the woman's feet.

"Right up to the very last," Deniger said, "when she was unconscious, I gave her a foot massage."

Deniger has been a Hospice Volunteer for 22 years. Partners in Home Care Volunteer Coordination Kyle Williams said, "The time Laurel has dedicated to helping people in your area is just incredible. She has been a volunteer longer than anyone else in Partners."

Hospice is a broad term for end-of-life care when the focus is no longer on curing but rather on easing the patient's suffering. A physician oversees the hospice team which usually includes a social worker, a registered nurse and a pharmacist. The client can also request a chaplain and a volunteer visitor.

Caring for one, occasionally two people at a time, Deniger visits the patients at their homes once a week, though she is permitted to put in extra time at her discretion. Sometimes the clients are people she has known for years. Other times they are people she has seen around but never really interacted with. Sometimes they are complete strangers. Currently, as often in the past, she is the only member of the hospice team who lives in the Seeley-Swan, the others travel from Missoula. On the initial visit, Deniger explains what kinds of help she can and cannot provide. In addition to sitting and visiting, she can perform services such as running errands or picking up items at the pharmacy, the grocery store or even the Food Bank.

"I've done a variety of things," Deniger said. "One lady, I did her nails every time I came. She loved it. For one gentleman who was living alone I made a variety of soups either at my home before I visited or at his house."

Deniger added, "His daughter just called me from Utah a few weeks ago and said, 'I need your potato cheese soup recipe.'"

Deniger is quick to point out that hospice is not only for the patient but for the family and caregiver also.

"Most of what I do," she said, "is respite care so the caregiver can have time to go visiting, go for a drive, get groceries or do whatever they want to do. I had a gentleman in Condon years ago that would go to the bar and have a drink."

While the caregiver is away, Deniger may sit and talk with the patient or read to them or watch TV with them "or just be darn quiet," she said. "You have to know when to leave people alone. They've got a lot on their minds."

Asked why she chose to become a hospice volunteer, Deniger said, "I had a lot of experience with death and dying."

While still in high school, Deniger twice sat at the hospital bedside of unmarried uncles as they were dying. In college, her 17-year-old brother was killed in a car accident. He was one of the first kidney donors in Sioux Falls, South Dakota. Deniger and her sister stayed with him until he was taken to surgery.

In 1998 Deniger's father died, followed two months later by her mother. Deniger was not present at her father's death and though she spent the summer visiting her mother who was in a care facility, her mother died two days after Deniger left.

"That just broke my heart," she said. "I never felt like I had done enough for my parents."

About a year and a half later, while watching TV news before going to work, Deniger saw a notice that hospice training was being offered in Missoula in January. It seemed to her like something she ought to do.

Training was six weeks, presented by different members of the hospice team. One night it might be given by a bereavement social worker, another time by a chaplain or the pharmacist who assigned medication. The training addressed the kinds of things a volunteer might do: how to spend time with a dying person, what other services were available for the patient or family, instructions on filling out Medicare or other paperwork. The training also covered what things volunteers are not allowed to do. They are not permitted to transfer (from a bed to a wheelchair, for instance), to bathe or change a patient, basically any of the tasks that a Certified Nursing Assistant is taught to perform.

"[During the training] there was a lot about confidentiality," Deniger said. "You never talk about anybody or even tell who you are offering hospice to. Living in a small town can be a problem," she noted. "People will say, 'I saw your car over at such and such.' Sometimes I will arrive and a neighbor or relative will call immediately and say, 'Who's there? Whose car is that.' I never mind when the client explains it's me, but I can't be the one to say it."

She laughed. "It's like somebody trying to have an affair. There's no hiding in Seeley Lake. 'What's your car doing over there at 5 a.m.?' I never say anything. I just don't."

In addition to the training, the volunteer must submit to a background check, have a valid driver's license and show proof of insurance. Supplementary guidance and learning opportunities are continually available for hospice helpers. Deniger said they used to have optional meetings once a month where fellow volunteers could share what worked particularly well for them or ask for suggestions on how to handle specific situations.

One thing Deniger started doing and recommended to others was creating a notebook and writing what she had done and what she had observed during her visit. She left the notebook for other visitors or the nurse or whomever to add their comments.

"That was really appreciated," she said. "The whole team has said many times that they want us to inform them about what we see, what's going on, if there are any conflicts or problems, what we think. Everyone approaches [the client] from a different perspective. Sometimes people feel more like confiding in someone who is 'just visiting' rather than to a nurse."

In addition to the learning opportunities offered by Partners in Healthcare, Deniger does "tons of bereavement reading" on her own. Aside from helping her understand what her patients and families are going through, she said, "It really helps you understand your own mortality. You get your paperwork in order: living will, power of attorney, funeral arrangements."

The COVID pandemic has been particularly disruptive of hospice services. Not only were meetings called off or changed to virtual, but for several months volunteers and caregivers were not allowed to continue seeing their clients. Deniger found that restriction very difficult, knowing both her patients and their caregivers needed her services more than ever.

"You can get really close to patients," she said, "You can also get darn close to caregivers. They are amazing."

Overall, Deniger considers the hardest thing she is asked to do is sit with the bereaved while waiting for the body to be removed. She said there was only one time when she was alone with someone when they died, but she is sometimes asked to sit vigil with a caregiver.

"How sad that is when they have to say goodbye," she said. "That's a really tough thing for the family."

Having helped the dying and their families for more than two decades, Deniger said she sometimes finds herself with a second member of a family she has previously served or with one of their adult children.

Asked how she handles the emotional distress of so many patient deaths she said "It's hard. It's darn hard. I get really close to a lot of the families. If there's a funeral or a service or a memorial, I always try to attend. People have been very appreciative. Most times the caregivers are so appreciative it's almost embarrassing. Overall, I've just had wonderful, wonderful experiences."

Then she added, "I wouldn't be able to do it if my husband wasn't totally accepting – for 22 years. He never questions. He never expects me to tell him who I'm seeing. When I get home, he just asks, "Well, how'd it go?" He never tries to find out more. He's been very understanding."

Volunteer Coordinator Williams said, "Laurel is just one of the most fantastic volunteers. She is just so devoted. It's so hard to find paid caregiving now, so the fact that she is willing to donate her time is incredible. You just don't find many people like that."