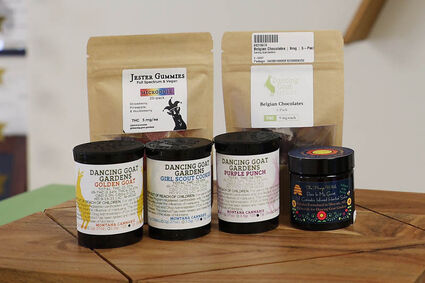 Read on for answers to those questions, and many more, in this Montana Free Press guide to the state's post-prohibition marijuana marketplace.

Who can buy marijuana in Montana? Starting Jan. 1, 2022, any adult age 21 or older can purchase marijuana and marijuana products. That includes Montana residents, residents of other American states and territories, and international travelers with valid identification.

What do I need to bring with me to a dispensary? Bring identification proving that you are at least 21 years of age.

Virtually all marijuana transactions are in cash due to ongoing federal restrictions on banking services for the industry. Bring your own to avoid paying ATM fees at the shop.

Shops are required to put your purchases in a plastic child-proof "exit bag." On subsequent trips, bring that reusable exit bag with you to limit waste and avoid paying for a new one.

Especially during the opening weeks of the recreational program, bring a good dose of patience. Budtenders will be answering lots of questions from novice consumers, and lines may be long.

What kinds of marijuana products can I purchase at a Montana dispensary? Customers will be able to purchase a wide array of products including marijuana flower (the smokable green buds), edibles, tinctures, vaporizer cartridges, concentrates and topicals. These products must be produced within the state of Montana.

Marijuana flower cannot contain more than 35% THC, the most common psychoactive compound in the cannabis plant (this applies exclusively to recreational sales, not medical sales). Flower typically contains between 15% and 25% THC, and is available in various strains with obscure and vivid names, from Apple Fritter to Peanut Butter Lady and Missoula Kush Cake.

Edibles are available in many forms, including chocolates, gummies, infused olive oils and more. A package of recreational market edibles cannot contain more than 100mg of THC (again, this does not apply to medical patients).

extracted cannabis oils, which tend to be extremely potent and are not recommended for novice consumers.

Customers will additionally be able to purchase smoking accessories such as bongs, pipes and dab rigs - a specific type of glass pipe used to consume concentrates - from pot shops. Those products can be manufactured in-state or imported from elsewhere.

Businesses will also be able to sell CBD products. CBD (technically known as cannabidiol) is typically derived from federally legal hemp, and is sold in edible, tincture, topical and other forms. Those products can be manufactured within Montana or imported from other states.

Is marijuana tested in Montana? Yes. All products must be tested for a wide range of bacteria, mold and heavy metals, as well as for potency and the various compounds they contain. The state is home to several testing labs; Fidelity Diagnostics and Stillwater Laboratories are the two largest facilities.

Are shops expected to run out of marijuana quickly? Industry stakeholders and business owners are bracing for a large influx of new customers that may liquidate their inventory quickly.

"There may not be much product available after the first couple of days, for several weeks," said Pepper Petersen, president of the industry association Montana Cannabis Guild. "Everyone's been prepping to get ready for this, but national trends [in states that have previously legalized] indicate a level of demand three to five times larger than for medical marijuana." There could be 200,000 new in-state customers, he added.

How much marijuana can I purchase at a time? Customers will be able to purchase up to one ounce of marijuana per transaction, or the THC equivalent in other forms: 800 milligrams of edibles or 8 grams of concentrate.

Customers are not limited to a single type of product, and can mix and match up to the limit between different forms.

Will my purchase be taxed? Yes. All recreational marijuana purchases will be subject to a flat 20% sales tax. As of this writing, Missoula, Park, Yellowstone and Dawson counties have enacted an additional local-option 3% tax.

How late can dispensaries stay open? Per House Bill 701, recreational and medical marijuana businesses cannot open before 9 a.m. or stay open past 8 p.m.

Can one shop sell another business' marijuana or marijuana products? Yes.

Although Montana's medical marijuana industry was previously vertically integrated, meaning that any medical dispensary was required to grow its own cannabis plants and produce any other additional products themselves, that restriction has been removed from both the medical and recreational markets in the adult-use legalization bill. As a result, a shop can now purchase wholesale and sell another grower's marijuana flower, gummies, vape cartridges and tinctures.

Can I buy marijuana anywhere in Montana? No. Per HB 701, only counties where a majority of residents voted in favor of cannabis legalization during the 2020 election have authorized recreational sales, and are referred to as "green counties." Counties that did not vote in favor of legalization, however, have the right to take a re-vote on the question and switch from a "red county" to a "green county."

You can find the full current list of "green" and "red" counties at https://mtrevenue.gov/cannabis/faqs/.

How much marijuana can I legally possess? Possession of up to one ounce of marijuana, or its THC equivalent in edibles, concentrates and other products, is legal in the state of Montana.

The law notes that a person convicted of the offense of unlawful possession of a legally permitted quantity of marijuana in a motor vehicle "shall be fined an amount not to exceed $100."

A DUI can be served to anyone with more than 5 ng of THC (the most common psychoactive compound in marijuana) per milliliter of blood. Yet since marijuana can stay in a consumer's body for up to three weeks, the results of such a test may not provide definitive information on whether the driver was actually under the influence of marijuana at the time of their arrest.

Can I possess or consume marijuana on Montana's Indian Reservations? This question is extremely complicated and contingent on how federal marijuana laws may be enforced in Indian Country, as well as how each tribe approaches the question of marijuana legalization. Marijuana remains a Schedule 1 controlled substance under federal law, even though it is legal in the eyes of the state.

Morigeau recommends playing it safe. "Be familiar with the landscape," he said. "You're not on state land, but in a different territory. Be mindful of that framework."

Can I possess or consume marijuana in National Parks? No. Since national parks, including Glacier and Yellowstone, are federal land, the federal prohibition of marijuana remains in effect there as well. Getting caught with marijuana in a national park can lead to a misdemeanor charge.

As the cannabis news outlet Leafly points out, even visitors to national parks from states with legal marijuana who get charged with possession in a national park can be subject to urine tests even after they return home to their legal-marijuana state.

Representatives of both Glacier and Yellowstone national parks declined to "speculate how the park might deal with a potential influx of cannabis consumers."

Can I grow my own marijuana? Yes. Montana residents are permitted to grow and possess up to two mature marijuana plants and two seedlings at home. Those plants cannot be publicly visible - failing to conceal them from view can result in a civil fine of up to $250 and forfeiture of the plants. House Bill 701 suggests that residents can possess more than one ounce of homegrown marijuana at home, as long as it is kept in a locked container and not visible to the public but does not specify a limit.