The state of printed news - Part I 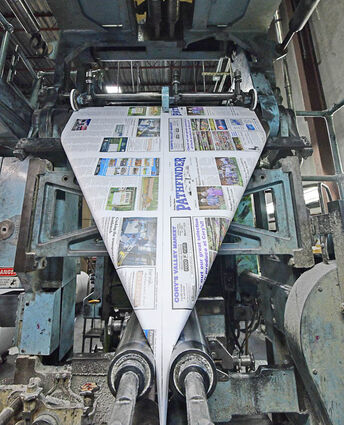 The final run of the Seeley Swan Pathfinder at River's Edge heads into the folder July 14, 2020. In Montana, there are more than a half dozen newspaper presses still in operation with facilities in Billings, Kalispell, Helena, Bozeman, Livingston, Anaconda and Havre. Some of these facilities print several other publications in addition to their own material. In recent years, the Missoulian, the Great Falls Tribune and River's Edge (Great Falls) presses have gone silent.

MONTANA - Newspapers around the country have seen sweeping changes in their structure within the last decade. Declining print numbers have forced publications to adapt to new markets and adopt new strategies.

According to a 2021 article titled, "22 US Newspaper Circulation Statistics You Should Be Aware Of" from Letter.ly, an online job board for journalists, weekday print circulation decreased from 63.3 million copies in 1984 to 28.5 million in 2018. The current U.S. newspaper print circulation is the lowest it has been since 1940 when official circulation data began being published.