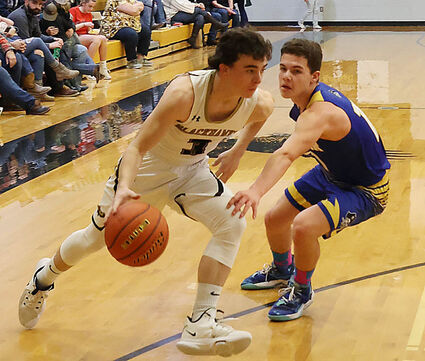 Senior Seth Richardson burns his defender on the way to the basket.

SEELEY LAKE - The Lady Blackhawks and Blackhawks hosted the Victor Pirates Dec. 22. The Ladies took a swift victory while the Pirates gave the Boys a little more of a run for their money.

The Lady Blackhawks came out shooting, putting up 29 points in the first quarter allowing the Pirates just 4 points. They added another 22 points by the half and finished the Pirates off 72-27 by the final buzzer.

Senior Tegan Mauldin shoots a three pointer. She hit 4 of them on her way to 20 points against the Pirates.

Sariah Maughan scored 14 while Dani Sexton had 9. Sexton was on fire from the free throw line hitting 7 of 8 attempted. Ava Thornsberry, Trista Alexander and Mia Saalfeld each scored 3 points.

The Blackhawks faced a little stiffer competition. They jumped to an early lead but couldn't put much distance between themselves and the Pirates through the middle of the game. The Boys hit their groove in the final quarter outscoring the Pirates 19 to 9 for a final score of 51-34.

Walker McDonald led the Blackhawks hitting 7 baskets and 6 free throws for 20 points. Jason James and Chase Haines followed with 9 and 8 while Seth Richardson put in 6 points. Klayton Kovatch and Owen Hoag each had 4 points.

Seeley-Swan's first game of the New Year is scheduled for Jan. 7. They will face Drummond on the road.