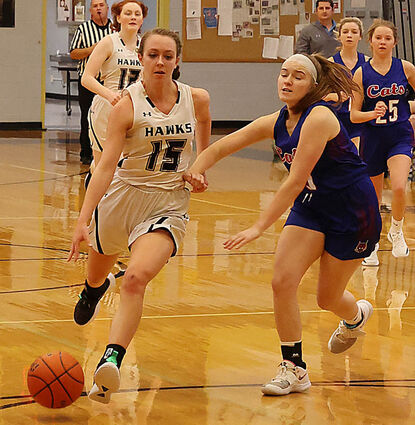 Senior Sariah Maughan cuts around a Bobcat on her way to the basket. Maughan scored 22 points in the game.

The Boys got right to work putting the Bobcats down eight points by the first buzzer. They maintained their lead through the second quarter. In the second half the Blackhawks took control allowing the Bobcats just three baskets and a handful of free throws while putting up 36 points of their own. The Blackhawks won 64-33.

Walker McDonald put in 6 baskets and a free throw to lead the Blackhawks with 13 points. Chase Haines was right behind McDonald with 11...