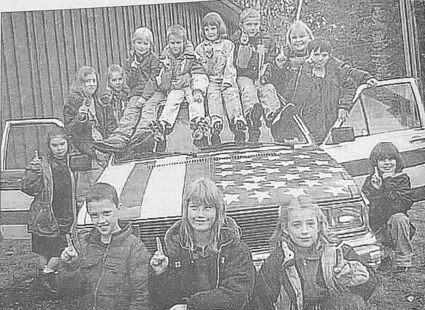 Some people said it couldn't be done - build a school gymnasium with volunteer labor. Members of the Swan Valley community proved otherwise, and last Tuesday night the first Elementary basketball game of the season was played inside the new gym.

Mike Holmes, school trustee who donated countless hours of time toward the project, spoke at an informal dedication ceremony on Tuesday. More than one hundred people crowded into the new building, many of them to enjoy the luxury of watching their kids play basketball here, rather than thirty miles away at Seeley Swan High School. Holmes thanked the people who donated "hours and hours" of their time during the past three years.

Rollie and Ronnie Matthew, of Matthew Brothers Construction, Condon, were pretty much the consultants on the project, according to Holmes...

To read the full article and more from the Dec. 18, 1986 issue visit https://www.seeleylake.com/home/customer_files/article_documents/1986-12-18.pdf

Our image of tourists often includes a picture of an overweight retiree in Bermuda shorts wearing a polyester shirt, rolling into a local campground behind the wheel of a 20-foot long motor home.

Members of the Institute of the Rockies, a non-profit organization, have been working on several projects that may target visitors who are more comfortable in hiking boots and Eddie Bauer wool malones.

The "rat race" project is a new idea where the Institute may attempt to match city folks with Montana vacation opportunities. Wilderness cabins, and places like the Condon Work Center, would be ideal "escape vacation" sites for urban residents, according to Dr. Charles Jonkel, wildlife biologist and vice president of the Institute of the Rockies.

"A lot of these towns along the Front (Choteau, for example) are going dead," Jonkel said last week, indicating that there may be houses that could be rented seasonally or places...

To read the full article and more from the Dec. 18, 1986 issue visit https://www.seeleylake.com/home/customer_files/article_documents/1986-12-18.pdf

State and federal wildlife officials today released the final report on the grizzly bear attack that cause a human fatality on October 30 on the Blackfoot-Clearwater Wildlife Management Area. Chris Servheen, the lead author of the report and the grizzly bear recovery coordinator for the U.S. Fish and Wildlife Services (USFWS) in Missoula, said the report summarizes everything we know about the incident and supports the conclusion that the female and two cubs destroyed at the attack site were the bears responsible for the fatality.

Servheen said, "The paw prints at the scene and the bite marks on the victim are consistent with the bears killed at the site."

Timothy Hilston, of Great falls, was found dead on the Blackfoot-Clearwater Wildlife Management Area northeast of Missoula (8 miles south of Seeley Lake) on October 31, by the Powell County Sheriff and the Powell County Search and Rescue team.

The 50-year old elk hunter had been reported missing the previous day.

To read the full article and more from the Dec. 20, 2001 issue visit https://www.seeleylake.com/home/customer_files/article_documents/2001-12-20.pdf