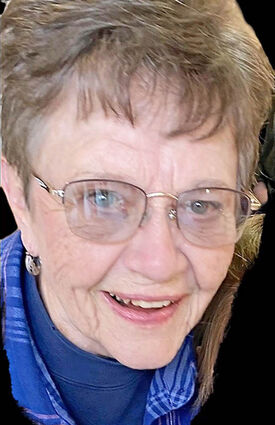 She was born on Sept. 13, 1941 in Missoula, Montana to George A. and Helen M. Walters Cyr. She was raised in Milltown, Montana and attended school in Bonner, Montana. She also attended Sacred Heart Academy graduating in 1959. She later attended nursing school at St. Patrick Hospital and worked as an IBM key punch operator in Seattle, Washington.

On April 4, 1964 she married William Lawrence (Larry) Copenhaver at St. Ann's Catholic Church in Bonner. The two built their house in Seeley Lake and it was the only place they ever called home. She was the bookkeeper for the family businesses and worked out of the home, at times, assisting the local dentist. Ann's true passion was being chief caretaker for our family and many others over the years. She took great pride in that job. She was also an active member of the Living Water Catholic Church in Seeley Lake, even chairing the building committee when the church built its new home on S.O.S. Road.

Her greatest accomplishment and pride and joy was her grandkids. She was the proud Grandma of seven grandchildren and six great grandchildren, "including the one due in a few weeks", she was always clear to point out. She was an accomplished fisherwoman and would never hesitate to point out a time she out-fished anyone.

She is preceded in death by her parents, older brothers Joseph Cyr, George Cyr and Donald Cyr, and her daughter Barbie Sue.

A Mass was celebrated Monday, Nov. 22 at St. Ann's Catholic Church in Bonner, Montana. The graveside internment was at the New St. Mary's Cemetery in Missoula. Her wishes were to be laid to rest with her daughter Barbie.