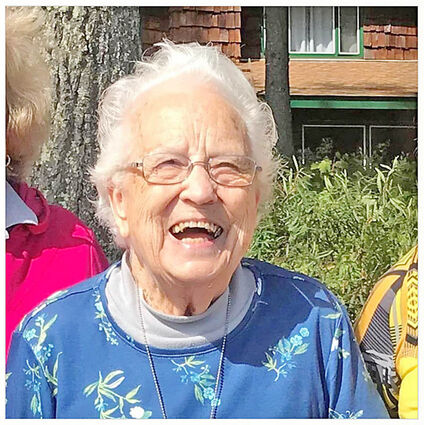 Eileen Elizabeth Patterson, age 93, went to be with her Lord and Savior Jesus Christ on Saturday, Oct. 30, 2021.

Eileen was born on Sept. 24, 1928 in Zion, Illinois, the daughter of C. Theodore and Bertha (Potter) Tollefsen. She graduated from Zion High School in 1946. A year later she went off to Northwestern Bible School in Minneapolis, Minnesota where she met and subsequently married James (Jim) Patterson. They were married in Zion on July 29, 1949. They both graduated with diplomas in Bible Studies the following year and then moved back to Fifield, when Jim took over the family farm.

Eileen was a woman of many talents! She was an excellent seamstress. She repurposed adult clothing to outfit her kids and did sewing and alterations to generate income, including sewing dresses for entire wedding parties (as well as a couple tuxes). She often created her own patterns, working from pictures (created her daughter's wedding dress from four pictures while living in Montana and daughter in Wisconsin).

She was an enthusiastic pastor's wife; active in her community, caring for their congregations, teaching both children and women's Bible classes. At one point she ran a Day Care at their church. Even after retirement and moving into Assisted Living, she enjoyed getting out, talking to people and being an encourager. Many people are recipients of quilts she made through the years. She also enjoyed crafting and putting together puzzles. Of course, her first love was being with her family.

She was preceded in death by: her parents; her husband Jim; brother Donald Tollefsen; sister Marjorie Duck and grandchild Nicolas Ryan Patterson.