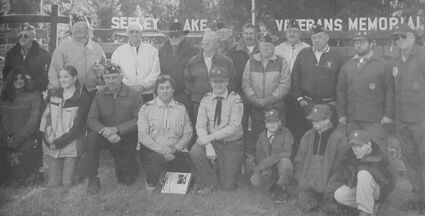 The dogcatcher is coming

The increasing number of off-leash, unsupervised dogs in the Seeley Lake area has not gone unnoticed by Missoula County officials. According to Linda Hedstrom, assistant director of environmental health and supervisor of the Animal Control Program in the County, complaints about "roaming" dogs have increased substantially in the past months.

"We've been getting lots of calls," she said. "There seems to be enough of a problem...to have an officer up there."

Hedstrom continued, "We have just been responding to complaints up to this point." However, she explained that, in the near future, an Animal Control Officer will patrol the Seeley Lake area weekly, picking up "dogs at large."

Missoula County required dogs to be licensed, have current vaccinations and also to be either on a leash or under voice control at all times, according to Hedstrom.

To read the full article and more from the Nov. 13, 1986 issue visit https://www.seeleylake.com/home/customer_files/article_documents/1986-11-13.pdf

In a continuation of its five-year study of traffic patterns, the Seeley Condon Chamber of Commerce conducted a traffic count Oct. 3-5, the weekend of the Outdoor Sports and Gun Show sponsored by the Wilderness Sportsman's Club. The three-day count totaled 4,071 vehicles.

As a control, a traffic count was also taken the following weekend, when there was no special event held in the area. The count for Oct. 10-12 was 3,942 vehicles. Thus, there were 119 more vehicles traveling into the area the weekend of the Gun Show.

Local businesses are encouraged to use these traffic counts to help determine how many of the vehicles traveling into the area are patronizing their businesses. This can be done by comparing the traffic count with the number of customers served or the cash receipts from the same dates as the traffic count.

To read the full article and more from the Nov. 13, 1986 issue visit https://www.seeleylake.com/home/customer_files/article_documents/1986-11-13.pdf

Few sell as much popcorn as Ryan does

Scouting skills are often put to good use later in life and if the selling experience Boy Scout Ryan Richards has learned is any indication, he'll probably be the number one salesman for some company in years to come.

Every good sales goal is set a little high but not too high to be discouraging. 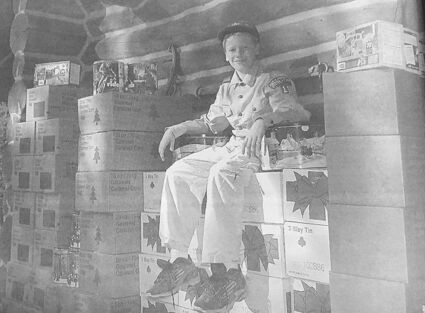 Ryan Richards sits upon thousands of dollars of popcorn products he sold.

He finished in the allotted time of two weeks with $3,606 in orders.

That's 90% of an ambitious goal and betters his mark of $3,100 last year when he finished fourth in the statewide competition.

The 12-year-old son of Mike and Lynn Richards, Seeley Lake, has led the scouting popcorn sale in Western Montana for the past two years. Statewide he has finished third and fourth in the past two years. His final standing statewide will not be known for this year until later in the month but Ryan will probably be up near the top...

To read the full article and more from the Nov. 15, 2001 issue visit https://www.seeleylake.com/home/customer_files/article_documents/2001-11-15.pdf