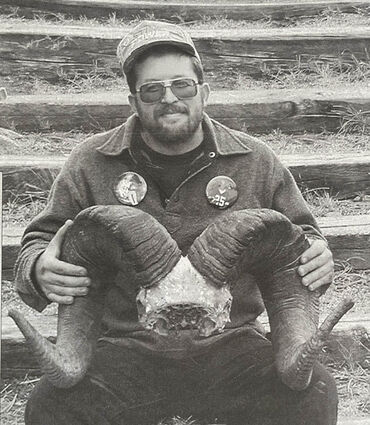 From the Nov. 8, 2001 issue: Jack Greenwood was featured in the Missoulian recently with his trophy ram, which with 203 unofficial "green" score in the Boon and Crockett scoring system, will rank it fifth largest of all time. Official score won't be determined until after a drying out period. Greenwood shot the huge ram in district 122 west of the Clark Fork River in an area known as the St. Regis Cutoff. Seconds before this shot, he almost settled for a smaller ram. The horns had 17-inch diameter bases on both sides, 43 6/8 inches around curl on right horn and 44 6/8 inches around the left. To read the Missoulian feature on Greenwood visit: https://missoulian.com/bighorn/article_aa06c88a-1473-59aa-b5bd-f11ab74b447c.html

The idea of a downhill ski area in the Clearwater Valley isn't exactly new, but the Growth and Development Committee of the Seeley Condon Chamber of Commerce is taking a fresh look at the possibilities.

Members of the Chamber of Commerce Growth and Development Committee have been pursuing the idea of a downhill ski area on Mount Henry for several months. The proposed ski area site is on land owned by Plum Creek Timber and lies approximately nine miles northwest of Seeley Lake. Mount Henry is due west of the old Grey's Mill site at the south end of Lake Inez.

About two weeks ago, Dennis Schneiter, Seeley Lake and Mark Williams, ski instructor at Durango, Colorado and seasonal resident of Seeley Lake, conducted an on-site evaluation and provided some preliminary data to the Growth and Development Committee.

Three-hundred and fifteen people responded to the survey, including 131 who were surveyed by phone and 184 who responded by completing written questionnaires. The area surveyed was Seeley Lake and Swan Valley.

Members of the fire district, water district, hospital district, refuse board and school districts, among others hope to be able to use this information as a guide in their decision-making process

Ken Weaver, survey consultant from the Local Government Center in Bozeman, indicated that he was disappointed in the number of telephone respondents. (He provided the Survey Committee with 400 randomly selected telephone numbers from which 131 responses were recorded.)

However, Weaver combined the survey data from both the written and telephone surveys and believes that "reliable inferential projections may be based upon the combined data base." Members of the survey committee will be examining specific survey responses in the coming weeks. General survey responses are as follows:

26.3% of the respondents said that they feel the needs and interests of the community are being heard by the Missoula County Commission. 40.3% responded "no" and 30.8% responded "don't know."

50.2% of the respondents said that they thought the community should elect a Community Advisory Council to better communicate our needs to the Missoula County Commission. 20.0% were opposed and 19.7% wanted more information on the subject. 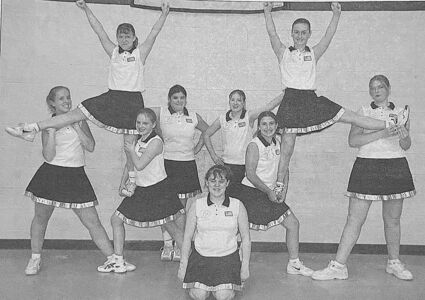 From the Nov. 8, 2001 issue: Backing the Ladyhawks at District Tournament are the Seeley Swan Cheerleaders. Under the volunteer direction of Terryl Bartlett, the cheerleaders have added lots of color and enthusiasm at all games. Kneeling at center is Elizabeth Jensen. In back from left, are Serina Fifield, Danielle Drew, Sarah Drew, Katie Biggins, Kayla Johnson, Stacie Morris, Coralee Ruth, and Jennalea Peabody.

As most of you already know, Timothy A Hilston, of Great Falls, was killed by a grizzly bear on October 30 while hunting elk on the Blackfoot-Clearwater Game Range. Our heart felt condolences co out to his family and friends. It could easily have been me, or my wife, or any of numerous friends who live, work, hike or hunt there. For that reason it has been a very sobering and tragic experience even for those of us who didn't know Mr Hilston personally, but who struggle with our own mortality, and that of our loved ones.

The bear was an adult female, about 15 years old, with two cubs-of-the-year. All three bears were killed by an interagency bear management team on Friday morning, November 2nd, after the bears returned to the site for the second consecutive night, apparently undeterred by the previous human activity associated with the initial search-and-rescue operation and subsequent onsite investigation. The cubs were killed because they were learning unacceptable behaviors from their mother, and the risk was too great that they would continue to initiate contact with humans in the future. Also, the cubs would not have survived on their own.

The investigation into this incident is still underway to try and learn as much as possible to help the U. S. Fish and Wildlife Service and Montana Fish, Wildlife & Parks...