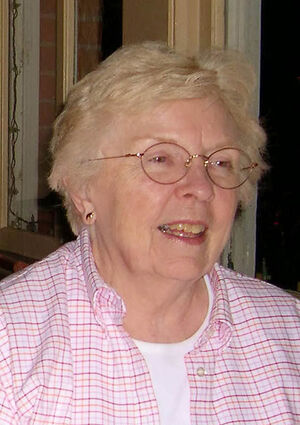 SEELEY LAKE - Barbara Edwards passed away early in the morning on Saturday, Oct. 16 with her devoted husband Scott at her side.

Barbara was born in Dayton, Ohio. Her family moved to Chula Vista, California when she was an adolescent. She married her high school boyfriend shortly after graduating and proceeded to have two children Mark and Candace.

Barbara knew Scott in high school but he was one of those "Levi and motorcycle" boys that she wasn't allowed to date. About 12 years later, Mom met up with Scott in Los Angeles, California. They married soon after and thus began 58 years of adventure!

They moved to Vail, Colorado when the Los Angeles urban sprawl, traffic and smog became too much to handle. While living in Vail, Barbara had several resort-related jobs early on. She then became the Executive Director for the Vail Board of Realtors, a position she held for over 10 years. During their time in Vail, Barbara and Scott also indulged in traveling to Cancun, Tahiti and Morocco.

As Barbara and Scott started thinking about retirement, they decided that Vail (now an international ski resort) was not where they wanted to stay. They took a road trip and on their way back home discovered the Seeley-Swan Valley. It wasn't long before they purchased the old diamond-window homestead north of town. They moved to Seeley Lake in 1992 and settled into semi-retirement. Barbara finally was able to satisfy her desire to learn how to quilt. Luckily, Deer Country Quilts hired her and those paychecks funded her projects. She was meticulous with her points (go ahead quilters, be jealous!) and donated the proceeds from several raffle quilts she made to Rolling Dog Ranch.

Barbara is survived by her husband Scott Edwards of Seeley Lake; her sister Mary Branson of Jamul, California; her son Mark Huffman of Jackson, Wyoming and her daughter Candace Marshall of Seeley Lake. She was preceded in death by her four-legged children Samantha, Jamoca, Thurston, Lacey, Shiloh, Jasmine and Barkley.

And yes, in case you are wondering, we do know what year Barbara was born. However, since she never told anyone that didn't need to know, why start now?