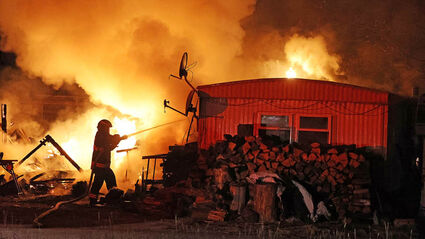 A Seeley Lake volunteer firefighter attacking the structure fire on Tamarack Drive Monday, Oct. 18 just after 11:15 p.m. The single-wide trailer was a total loss after firefighters were called back around 4 a.m. for a second fire.

SEELEY LAKE – The Seeley Lake Fire Department was dispatched to a structure fire on Tamarack Drive on Monday, Oct. 18 just after 11 p.m. According to Fire Chief Dave Lane, volunteer firefighters extinguished the fire and left the scene around 3 a.m. Tuesday morning. They were called back within an hour to the trailer that was 25 percent involved when he arrived. Lane said he determined the initial start was electrical in origin. However, the second start was suspicious. No one was injured and the trailer was a total loss.

Volunteers were dispatched at 11:18 p.m. Monday night to a burning...