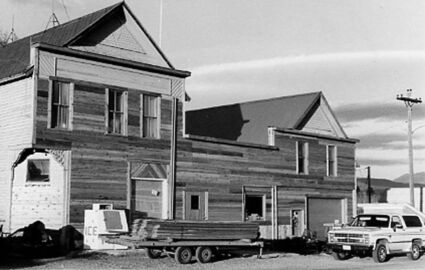 The new switching equipment was installed by Blackfoot Telephone last week, according to Earl Owens, supervisor for the cooperative.

Residents of Ovando and Greenough will still have to dial 1-728-0911 to reach emergency services, although Owens pointed out that they, too, will receive the switches in 1987, enabling them to simply dial "911" sometime next year.

Installation of new phone equipment also means that Swan Valley residents must now dial all seven digits in a phone number for the call to go through.

Two hundred and sixty nine rainbow trout, averaging four and a half pounds in size, were planted Monday in Harper's Lake near Clearwater Junction. A total of 1,212 pounds of fish were brought from the Arlee fish hatchery, according to Jim Crepeau, hatchery manager. Dan Cainan and George Wright, Seeley Lake, helped Crepeau with the planting operation.

The large rainbow trout are retired broomstick from the hatchery. Crepeau estimated that the largest of the fish weighed about 12 pounds. Most of the fish were males which were used to fertilize eggs, although there were about 30 females, two dozen of which were the big four-year-olds.

Crepeau said the broodstock are used for two years and then retired and planted into area lakes, including Seeley Lake, Van Lake in the Swan and Lake Como in the Bitterroot Valley. "If we keep them any longer (in the hatchery," Crepeau added, "they get too big to handle..."

Seeley Lake's second annual YAMAFEST, a snowmobile festival to be held Jan. 16-18, 1987 is shaping up to be the largest snowmobile event in Western Montana.

YAMAFEST, sponsored by Yamaha Motore Corporation USA, the Seeley Condon Chamber of Commerce and five Western Montana Yamaha dealers, will feature snowmobile competition events and activities for the entire family. Trophies and prizes will be awarded.

Registration and events will begin Friday evening, Jan. 16 at YAMAFEST headquarters, the Seeley Lake Community Hall. A chili feed and dance to live entertainment will be held Saturday night, Jan. 17.

Snowmobile clubs which will participate in YAMAFEST are: The Seeley Lake Drfitriders, The Missoula Snowgoers, the Mission Mountain Snowmobile Club from Ronan, the Bitterroot Riderunners from Hamilton, and the Flathead Snowmobile Association from Kalispell.

Be prepared for a long conflict

(Tom Mitsoff is a long-time newspaper editor and syndicated editorial columnist. This piece was written shortly after the Sept. 11 terrorist attacks on the World Trade Center and the Pentagon.)

Our enemy now has a name.

And it's not Osama Bin Ladin.

Vice President Dick Cheney told the nation recently during his appearance on NBC's "Meet the Press," that the United States is focused upon the international terrorist organization known as Al-Qaida. Bin Ladin is the founder of the organization, and therefore is certainly a target of the inevitable United States military response to terrorist attacks here on September 11.

But as with any nation, religion or ideology - all terms, which can be used to describe the Al-Qaida organization - it cannot be defeated by merely defeating one man or individual. There are many who share Bin Ladin's beliefs and, as we discovered, to the extent that they were and are willing to give their lives for the cause. In that respect, they are no less passionate for their nation, religion or ideology than are Americans.

What a great town we HAVE!! I just want to thank all the businesses and people of Seeley Lake for donating their time and their money to help the Seeley Lake New York City Relief Fund.

Elaine Warholic came up with this idea to place cans all over in different businesses to start up a fund tor the terrible disaster on Sept. 11, 01, in New York City.

I helped her get cans ready and we placed them around the businesses. I asked for our Seeley Lake Elementary school if maybe we could do a penny drive and everyone was very enthused about this. I got a fireman's boot from our Fire Department and the children filled it to the top with coins... 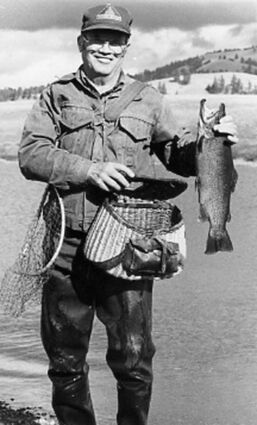 Fred Gallwas, Missoula, happened to be in the right place at the right time Monday as these trout were planted in Harper's Lake.

The Seeley Lake Community Council is continuing to expand the recreational travelways.

A route is being planned which will allow people to travel around Seeley Lake without having to be on the roadway.

The next phase being considered will start on the south end of Boy Scout Road at Highway 83, go west to the State Section #4 then south into National Forest land.

An application for a grant from the State of Montana through the Recreation Trails Program is being prepared to be submitted by Nov. 16.

The first segment will be .08 miles along the north edge of Boy Scout Road at the south end of Seeley Lake. A 10-foot strip will be cleared to build a gravel-surfaced travelway.