Betting on biochar in Bonner 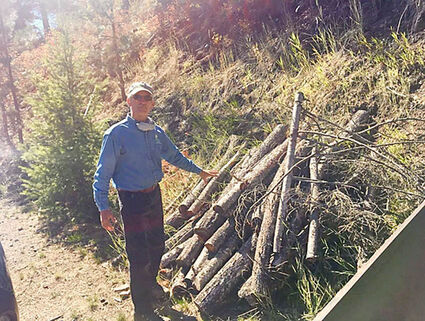 Dave Atkins stands by a pile of trees culled from his property that he'll use to create biochar. Most of this material is smaller than 5 inches in diameter, meaning there are few markets for it. Atkins says biochar production could change that.

On a 159-acre working forestland east of Bonner, Dave Atkins' personal and professional interests overlap. There, in a stand of dry conifer forest populated with ponderosa pine, Douglas fir and the occasional western larch, Atkins tinkers with forest management techniques he's learned over the past half-century in an effort to better equip his property for the changing conditions of the next 100 years.

Now retired, Atkins had a long career with the U.S. Forest Service that spanned several disciplines. He started out as a silviculturist, directing timber harvests on the Lolo National Forest. Mid-career, he returned to school to earn a master's degree in ecology, taking a particular interest in old growth timber. When he retired from the agency 20 years later, he was managing the wood innovation program out of the agency's Washington, D.C. office, where he focused on finding markets for wood that's too small or poorly formed to mill, and often too much of a wildfire hazard to leave in place.

That's where Atkins began learning about biochar, a material that's produced by burning biomass in a low-oxygen environment long enough to produce charcoal, but not so long that the feedstock turns to ash. Atkins says creating biochar out of young, skinny trees can reduce wildfire risk by removing "ladder fuels" - flammable material that can carry flames into the forest canopy - from vulnerable forests without releasing stored carbon into the atmosphere the way pile burning, the more common alternative, does. Whereas pile burning releases smoke containing small particulates that create a public health hazard, biochar production generates much less smoke. That's a particularly important consideration in Missoula County, where smoke-trapping inversions are common.

Beyond its potential to sequester carbon, biochar can improve poor farm soils and help rehabilitate sites where mineral or fossil fuel extraction has occurred. Adding biochar to a hard rock mining site can reduce the acidity and heavy metal pollution associated with mine drainage. Applied to drilling pads, it can expedite revegetation efforts.

"Biochar is this phenomenally versatile material that can improve agricultural soils, help restore distrubed sites from mining or road construction, and the icing on the cake is that it's a way to store captured carbon for hundreds to over a thousand years," Atkins said. "It delivers a lot of positives."

Much of what makes it work for these applications is its structure. Biochar is porous, with a honeycomb-like configuration. Its abundant surface area creates a kind of scaffolding for poor soils, particularly those that have a hard time holding onto water or nutrients. When it's applied thoughtfully - often mixed with an organic soil amendment like livestock manure or compost - it can also improve nutrient uptake in plants. In an orchard or an arboretum, biochar buried at the right depth during planting can stimulate root development, decrease water requirements and help trees withstand drought.

But its potential still isn't widely appreciated, at least not in the United States. Tom Miles, a Portland, Oregon-based agriculture and energy consultant who directs the US Biochar Initiative, said its potential is starting to gain recognition in agricultural and environmental circles, but it remains off the broader public's radar.

"Markets and uses are what's ultimately going to drive production," Miles said. "The biggest hurdle we've had is education."

He said biochar isn't produced at scale right now, so prospective buyers often face sticker shock. (A cubic yard of biochar produced in Oregon runs between $110 and $150, depending on the delivery method and quantity purchased, Atkins said.) Miles estimates there are 150 biochar producers in the U.S., most of which have smaller operations and relatively high product prices to recoup their labor and equipment investments. He said he's hopeful that will change as more affordable industrial-scale biochar kilns - equipment to "cook" the biomass, essentially - enter the market.

Atkins' current project at his property is part of a collaborative forest management effort that involves 570 acres, three government agencies, two nonprofits, two private landowners and University of Montana researchers. The Wildfire-Adapted Twin-Gold Creek Project recently received $288,000 of support from the state in the form of a Forest Action Plan grant. With some of that funding, Atkins will use small-diameter material culled from his property to produce biochar, first with two low-tech kilns already on the site, and later with more sophisticated equipment that the Bureau of Land Management will help bankroll.

Atkins and his wife, Shirley, staff a booth at the Clark Fork farmers market in Missoula to sell the biochar he produced from last year's thinning project and build community awareness. He said he made four sales of what he's branded Blackfoot Biochar at a recent market, and estimates one in 10 people he spoke with had heard of biochar before. In other words, he recognizes there's a long way to go.

"This is a labor-intensive, unautomated process, but it goes back to raising awareness and doing some marketing," he said. "You've got to start somewhere."

Atkins is set to receive more help on that front in the coming months. University of Montana forest operations professor Beth Dodson will be researching the economics and logistics of biochar production over the next two years. A graduate student will assist her by comparing the cost of biochar production with that of pile burning, which is currently the most popular method for disposing of thinned forest material. Dodson also has support from the Forest Service to take a more qualitative look at the biochar production process. As part of that project, she'll examine biochar-friendly designs for thinning projects and how best to process, store and distribute the final product.

One of the Twin-Gold Creek Project's overarching goals is to use biochar to repurpose forest thinning byproduct for agricultural use in the Blackfoot Valley, though the details of exactly how and where that might happen are still being worked out.

Dodson said she's hoping her research can provide a more fulsome picture of what it will take to make biochar composed of forest products commercially viable at an industrial scale.

"This is the first time in the last 10 years or so where a very real, logical outlet for that material is actually in place," she said. "A lot of people have looked at biochar and extolled its virtues, but without an actual outlet for anyone who could purchase and use this material at scale."

The Twin-Gold Creek Project also comes at a time when existing national biochar programs are scaling up and Congress is considering a sizable investment in biochar. Miles said a cost-share program administered by the Natural Resources Conservation Service that's aimed at increasing the carbon content of soils will be available nationwide in the coming months. At the legislative level, the $1 trillion infrastructure package passed by the U.S. Senate last month includes $200 million to remove flammable vegetation for use as biochar and other innovative wood products. If the package is passed by the House and programs are implemented the way Montana's Democratic Sen. Jon Tester envisions, tribes, veterans, youth and conservation corps will have a role in biochar production.

"Clearing out low-value, high-risk vegetation to create biochar is a win for wildfire safety and communities in the wildland-urban interface, a win for the climate, and a win for agricultural producers, and I will continue working to push this and other proposals like it that will help us reduce emissions and address climate change, especially as the threat of wildfires continues to rise," Tester said in an emailed statement.

A substantial piece of Atkins' interest in biochar centers on how it plays into the carbon cycle, which comes into focus when he talks about how carbon dioxide and other greenhouse gas emissions are shaping the planet his descendants will inhabit.

"I see biochar as one more benefit of forests and wood products in helping us create a low-carbon, sustainable world. Part of what motivates me is two little grandsons that are 3 and 6, and wanting them to have an opportunity at a healthy ecosystem and climate that I had," he said.

Though Atkins' project is small in the scheme of things, he's energized by the holistic approach he sees in the proposal. If the Twin-Gold Creek Project develops as planned, the approximately 75 homes within a mile of his property will be less vulnerable to wildfire, mature pine trees will be more likely to survive a fire, and the biochar derived from younger trees will help make agricultural land more resilient to drought, which is one way climate change is manifesting in Montana.

The Nature Conservancy, which led the charge on the Forest Action Plan application, estimates the project will store the equivalent of 1,036 tons of carbon dioxide and produce nearly 300 tons of biochar. The report the collaborative is working on will be shared with an eclectic collection of groups including Blackfoot Challenge, the Montana Tree Farm Association, the Missoula County Air Quality Advisory Council, US Biochar Initiative, and the Montana Loggers Association. 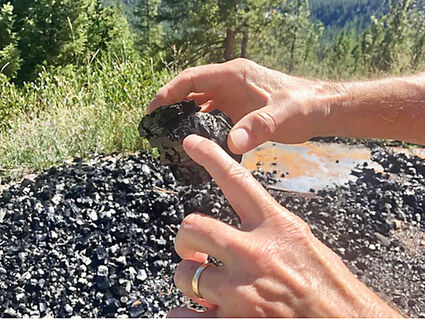 Biochar has been used for centuries. Researchers believe that Indigenous people living in the Amazon basin added charcoal to their soil as many as 2,500 years ago to help it retain nutrients and become more productive for farming. This practice created "terra preta" or "dark earth" soils.

​​The application acknowledges that there are still plenty of unknowns presented by the project, including its economic viability, whether biochar's application on farmland in the Blackfoot Valley will have the desired effect, and whether greater public awareness of biochar's potential will lead to increased enthusiasm for its production and use in Montana. In the Forest Action Plan application, biochar is described as being positioned similarly to the solar industry 30 or 40 years ago.

Atkins says that nearly two decades after he first started learning about biochar, the pieces appear to be falling into place. As they do, two ambitions are converging for Atkins: his post-retirement acquisition of a working forest of his own to experiment on, and an opportunity to steer the carbon cycle in a way that's beneficial to his community, the climate and agricultural producers.