Adopting the simple life over 2,650 miles 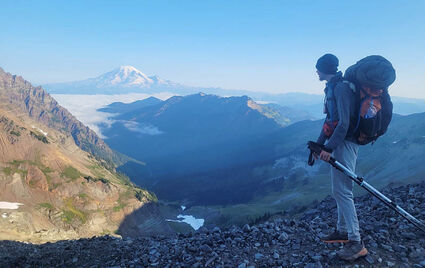 Kyle Peltier taking in the view of Mount Rainer. Trekking poles were necessary equipment, "If I didn't have trekking poles I probably would have died," he said. "It takes weight off, it helps you go up hills, if you trip it is something to catch you. Also it is a fun sword if you need it."

"We did it, we made it to Canada," 20-year-old Seeley Lake resident Kyle Peltier said as he approached the northern terminus monument at Canada. After five months and one day hiking the Pacific Crest Trail (PCT), 2,650+ miles from the United States southern border to Canada, Peltier met his goal. Not only had he pushed his body physically but won a mental battle that gave him a stronger sense of identity and a better understanding of a simple life.

Peltier started the PCT April 11 with a goal to finish in four months. He started with a pack that weighed around 50 pounds that included five...