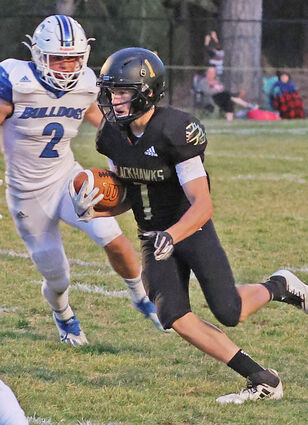 Ben Haley runs the ball after receiving a pass from Owen Hoag. He had 3 receptions for 26 yards and one carry for a 16-yard touchdown in the game against the Bulldogs.

SEELEY LAKE – The Blackhawks hosted the Mission Bulldogs Oct. 1 and suffered their second loss of the season. Their record is now 3-2.

The Blackhawks were down 0-12 early after allowing a pair of touchdowns in the first quarter but put up a good fight the second quarter.

Owen Hoag pushed his way in for a 1-yard touchdown to put up the Blackhawks' first points early in the second quarter. Walker McDonald made the extra points good to bring the score up to 8-12.

The teams battled back and fourth taking several minutes off the clock before the Bulldogs scored their second touchdown of the qu...