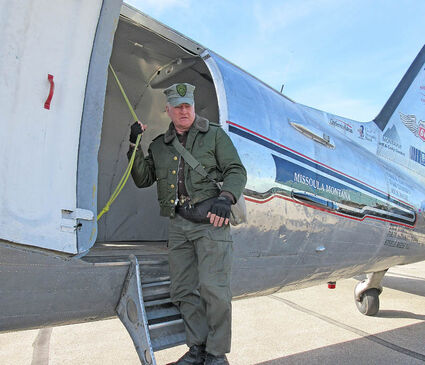 Missoula County Sheriff's Office Sergeant Robert Parcell took a ride in Miss Montana at the 1971 Smokejumper New Man Class 50th reunion last week. He was one of 39 that graduated in 1971.

MISSOULA - The 1971 Smokejumper New Man Class had a 50th reunion in Missoula on Sept. 21 and Sept. 22. The reunion included a flight in Miss Montana, the restored C-47 aircraft. Among the 18 in attendance from the 1971 New Man Class was Missoula County Sergeant Robert Parcell.

Parcell was among the 39 graduates of the 50 that started rookie training. He jumped from 1971 – 1974 and again from 1980-1983 after serving with the Marine Corps. In the late 1980's and early 1990's, Parcell was the only "jumping" deputy sheriff in the country. He remained qualified, trained and jumped with the Missoula Smokejumpers until called up for the First Gulf War in 1991. His parachuting ability allowed him to act on behalf of the Sheriff's Office in situations such as airplane crashes and other backcountry emergencies.

Parcell said the biggest changes he has seen in smokejumping in the past 50 years is the advancement in equipment and roles the jumpers play in firefighting.

Along with the aircraft changes, they also have changed the parachutes from a round chute to a square.

"They are like flying wings," Parcell said referring to the square chute. "When we jumped out we were basically under a round chute that had a lot less maneuverability. The wings can fly circles around the rounds that I jumped."

Parcell said he used to jump in the Bob Marshall and Selway-Bitterroot Wilderness areas in the 70s and 80s. However now under the "let it burn" management strategy, until there is a threat to the urban interface, wildfires are allowed to burn.

"In those days the fastest way to get there was to put an aircraft in the air, circle and follow the storms and as you saw them hit, and you saw them hit, you jumped the fires," Parcell said. "Now you can actually get people there pretty quick by ground pounding, engines on the ground or by helicopters."

Parcell explained helicopters used to be very expensive but now there are a lot of aircraft. There is also more road access. While this reduces the need to jump into a wildfire, smokejumpers are being used as overhead on fires because they have the most experience. 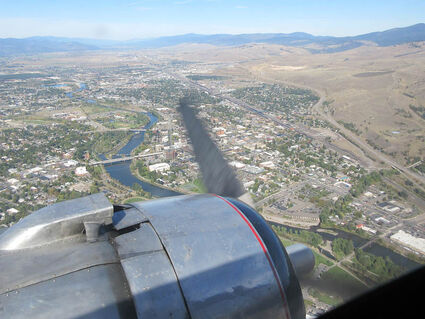 Those in the 1971 Smokejumper rookie class had the opportunity to go for a ride over Missoula in Miss Montana.

As part of the two-day reunion, the Smokejumper Class of 1971 had the opportunity to go for a 30-minute ride in Miss Montana. Miss Montana dropped smokejumpers on the Mann Gulch Fire near Helena on Aug. 5, 1949. A team of 15 smokejumpers parachuted in where they met up with a former smokejumper that was employed as a fireguard. Only three of the smokejumpers survived.

"The flight brought back all the old memories in a rush," Parcell said. "When you hear the noise and the smell, the sights, it just brings everything back. You just feel yourself sitting in your jump suit just waiting for the next pound on the door."