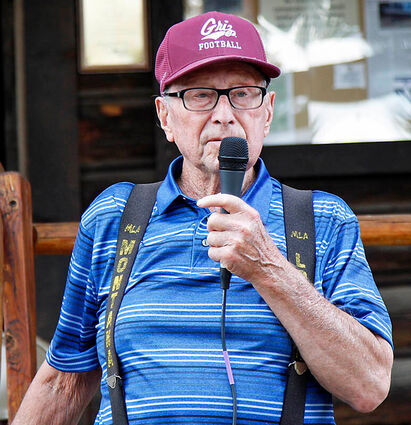 Interaction between the speakers and the audience at the Roads and Trails program presented Aug. 7 by the Upper Swan Valley Historical Society generated additional tales worth sharing. These short stories wrap up the eight-week series.

Someone from the audience asked Leita Andersen, to "tell that story about the time you were going to a dance and the car broke down on the road and the weather was like forty degrees below and you had on silk stockings..."

Leita obliged. "At that time," she said, "I was infatuated with Rod Fox. [He] had a great big truck of some kind. It was an old Army outfit. So [he and a friend] come down and got me and my girlfriend that was staying with me. Of course, we were all dolled up. You had to put silk socks on. And nice coats and stuff because it was cold. We got over by Hulett's and the truck quit. I don't remember how we got the rest of the way. Oh, I think it was Emma and Uno Strom was going on the old road and was going to the dance and so they took us up there and we danced all evening. [Rod and his friend] didn't go home, so we had to catch a ride back with Emma and Uno. My girlfriend and I had to get back some way because mom would have been raging if we hadn't.

Yeah, it wasn't too smart, but in them days if you wanted to go someplace you'd just pile in and go. Whether it was snowin' or blizzardin' or no matter what."

Neil Meyer talked about meeting Leita's sister Dixie who later became his wife. "It was 1954, I guess. I was working logging up here and staying at the camp at Wineglass. Some event was going on, a dance or something, and that's how I run into her."

He recalled dating her. "That was in 1954 before the highway and before electricity," he said. "I'd pick her up and maybe we'd go to Kalispell and we'd go to a drive-in movie. So I'd get her back about one or two o'clock in the morning and then I'd go back to Bigfork. I'd get back about six in the morning. It took quite a while."

Not only were the early Upper Swan Valley roads long, winding and challenging to drive, according to Gene Miller getting gas was also an adventure.

"The only way you could get gas was to go all the way to Seeley Lake or go all the way to Swan Lake," Miller said. "People would bring in barrels of gas. Then Tauno Strom decided it would be better to have a regular place. So he dug a hole and buried a big tank underground and put in a gas pump."

Miller described pulling the manual lever used to pump gas up from the underground tank. Someone from the audience called out "ten gallons' and Miller agreed, "Ten gallons was the most you could get at one sweep."

Someone else asked where the old station was located. Miller said it was at Swan Valley Centre "same place as it is now."

Miller continued, "Tauno would go into town every Wednesday, we all knew that. So if somebody needed something from town, why they would say 'Could you pick this up for me?' And a lotta times he would pick up bread and rolls too because the only kind of bread we got up here was what you baked in the oven. So that was a treat. He started bringing up dry goods and canned goods and things like that too. So if people ran out, why they could go down to Strom's store. That was a big deal!

"Course cigarettes was another big thing for him. They sold a lot of cigarettes because that was the thing to do in Swan Valley – to smoke. It went like that for quite a few years. He would go out and get about five 55-gallon barrels of gas every week and pump it from the barrels into the tank underneath the pump. My dad would often go down Wednesday evenings and help him wrestle the barrels around so they could get all the gas out of them.

"That was great for me. I loved to go down there when my folks would go down."