Seeley-Swan High School graduating classes from 1965 - 1975 gathered for a reunion Sept. 25 at the Seeley Lake Community Hall. Many said they enjoyed the opportunity to connect with those they had lost touch with and enjoyed sharing stories and memories about their years in high school.

SEELEY LAKE – The Seeley Lake Community Hall was filled with laughter, hugs and smiles as around 50 graduates from Seeley-Swan High School classes 1965-1975 shared memories, stories and reconnected. While there were plenty of games and other activities, conversation in small groups of friends dominated the afternoon. There was also a memorial where graduates could honor other graduates that have passed.

A handful of the graduates still live in the Seeley-Swan while others traveled from around the country for the gathering. While some said they were "sworn to secrecy," others claimed their memory had failed, and still others claimed any story they would share was unprintable, a few stories were shared from past graduates.

Lloyd Stokes, the sole representative from the Class of 1965 and oldest graduate in attendance, traveled from Seattle for the event. His most notable memory from high school was having the name he came up for the mascot chosen by popular vote. He came up with "Blackhawks."

"There are no Blackhawks around, but that is what I chose," Stokes said and laughed. "Everyone liked it so much that it is still there."

Jim Betson of Seeley Lake graduated in 1970. He played football throughout high school.

The Science Teacher Mr. Boyer had a little Volkswagen Bug. When he grounded a bunch of the football players from the weekend game, about half the football team re-parked his car for him.

"He found his car on the porch [of the High School]," Betson said adding the car was pretty light. "He told us we couldn't play that weekend so he couldn't go home that weekend."

Betson said none of the people that put Boyer's car on the porch helped get it down. 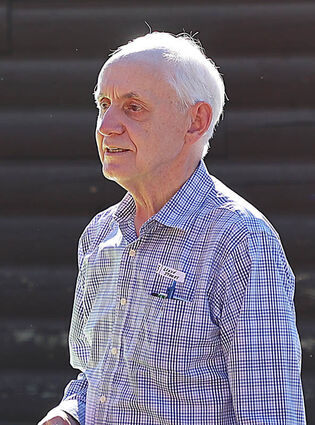 Lloyd Stokes was the only graduate in attendance from the Class of 1965. Stokes came up with the mascot name "Blackhawks."

Betson said that wasn't the only time they "got even" with the science teacher that year. His Volkswagen had a gas heater. They took the cover off and packed it with fresh cow manure and replaced the cover.

"When he started it up he got green smoke inside the cab," Betson said and laughed. "It is the kind of stuff you probably couldn't do now."

Another local and 1974 graduate Cindy Lewis was also an athlete. She said after nearly every away game, they would stop for chicken dinners at Double Front. At that time the chicken dinner with fries was only $2.50.

"Half the girls couldn't eat that much so the guys would eat a chicken and a half," Lewis said. "We had so much fun. I had a blast, I loved school all of it – the sports and the academics and just all of it."

Organizer Sandi Herbert appreciated everyone coming, "We just had a really good crowd."