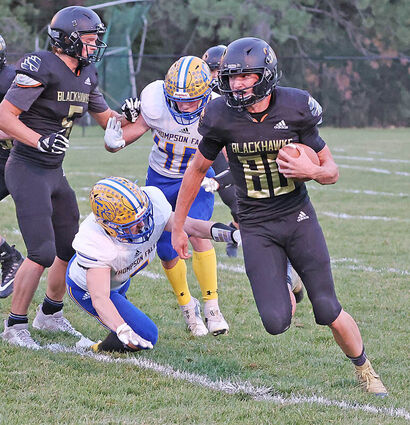 Junior Owen Hoag breaks away from defenders for a 72-yard touchdown.

SEELEY LAKE – The Blackhawks hosted the Thompson Falls Blue Hawks Sept. 24 and suffered their first loss of the season.

The first minutes of the game were disastrous for the Blackhawks setting a grim tone for the rest of the game. Blackhawks' kickoff was returned nearly the entire length of the field and Thompson Falls scored a touchdown two plays later. Thompson Falls was back in the end zone three plays later after picking off a pass making it 0-14 with 10:38 on the clock.

Thompson Falls took in another pair of touchdowns before the Blackhawks were able to get on the scoreboard. On a...