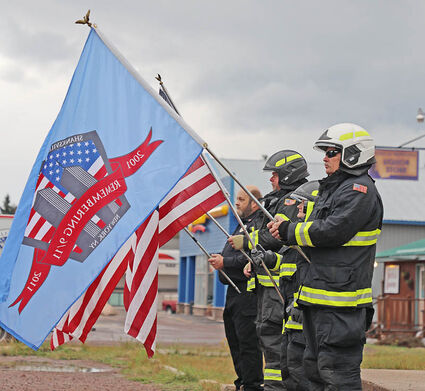 Members of the Seeley Lake Fire Department Chief Dave Lane, Shelley McGraves, John Baker and Captain John Homen standing for 102 minutes Saturday, Sept. 11 on Highway 83 in front of the Post Office. This was the amount of time it took for the first of the two Twin Towers to fall. This was the 13th year the Department has done the stand-in on Highway 83.

Twenty years ago on Sept. 11, 2001 Americans watched on television or were witness to the horror as aircraft hit the World Trade Center Twin Towers and crashed into the Pentagon. The images that were replayed over and over on the television and that others witnessed first-hand are seared in the minds of those of us old enough to remember. When the dust cleared, the Al Qaeda terrorist attacks not only united Americans but also changed our country forever.

Nineteen men hijacked four US commercial planes bound for California on the morning of Sept. 11, 2001. They committed murder-suicide kill...