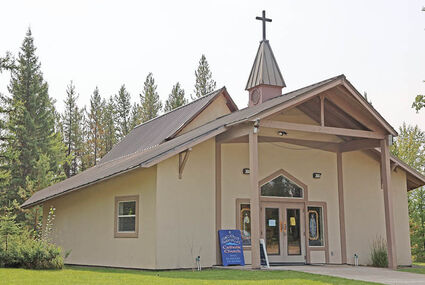 SWAN VALLEY – Called "a jewel of faith" at its dedication Sept. 1, 1996, Our Lady of Swan Valley Mission Catholic Church (OLSV) celebrated 25 years Sept. 6. It has strived to follow the words spoken over it at the dedication "to be a spring of living waters, a school of wisdom where we will learn to put God first, neighbors second and ourselves last."

"Given all the circumstances, keeping this church going for 25 years would have been humanly impossible if not for the grace of God and the fidelity and a generosity of a handful of people that love God, are faithful and love their neighbor," said Michelle Jenkins, OLSV pastor assistant for the past 32 years.

For 17 years the Swan Valley Catholic community met for Mass at Faith Lutheran Church. They built a strong ecumenical relationship with the Lutheran community.

"There was a time [historically] that Lutherans and Catholics would not share a church building," Jenkins said. "We had such a great relationship."

Following Mass Dec. 9, 1990, Bishop Elden F. Curtiss told the parishioners that he would like them to build a Catholic Church in the Swan Valley.

"There was a collective gasp, 'Is he crazy?'" Jenkins said. "We were a very small community of maybe 20 families and our weekly income was something like $120 a week. Everybody thought it was impossible."

Jenkins said Curtiss's reasoning was to ensure a Catholic presence in the Valley. He didn't feel he could do it without a church. In the Catholic faith there is a belief in the real presence of Jesus in the Blessed Sacrament.

"Obviously God is everywhere and we worship him everywhere but for us as Catholics, that presence of the Blessed Sacrament in church is really going into the whole sacred space because He dwells there in a unique way."

The Catholic community stepped out in faith believing that the Bishop's word was God's will. With a nest egg of $17,000 they faced what seemed like an impossible goal to raise $100,000 to build a church, paying as they went. In spring of 1991, they formed a building committee and put out letters in search of property. Gene and Margaret Leistiko donated two acres of land off Beck Road.

As the pastoral assistant, Jenkins was tasked with sending out appeal letters to many people that she didn't know. She was new to the Valley and was a new convert to the Catholic faith, becoming a consecrated woman less than six months prior.

On the list was Dr. Lendal Kotschevar of Lindbergh Lake. Not expecting to hear from him since she had never seen him at Mass, she sent the letter anyway since it was just the cost of a postage stamp.

Two days later he called Jenkins and told her if the church raised a certain amount, he would match the $22,000 required to receive the $60,000 matching gift from the Francis Baldy family of Rendville, Ohio through the Catholic Church Extension Society.

They started with the plans for a one-story, 1,000 square foot church. However after more discussion, Jenkins said they felt it was important to add space for a social hall. They decided to "stick their necks out" and build a daylight basement which more than doubled the cost. However, "by a miracle of grace" they raised all but $10,000 by the dedication. In the summer of 1997, they received a gift of $10,000 and were debt free.

Local community members cleared the land. Architect and parishioner Larry Deeds designed the building to suit its wilderness setting and the congregation including 20 families in the winter and many more in the summer. Rick Bishop of Bishop Builders was the general contractor.

Jenkins said the building project united the small Catholic community. To see it complete was a great joy and great strengthening for the congregation and allowed them to participate in true Catholic worship. She explained when the church was consecrated with holy oil by the Bishop, it was set apart for the use of God. This allowed them to worship "most worthily" according to their beliefs.

"To have an altar that was dedicated for the sacrifice of the Mass was a very beautiful and meaningful thing for us which we couldn't have in a church that we were just renting," she said.

In the upcoming years, Jenkins said OLSV offered catechism classes, Bible studies, weekly services, baptisms and funerals. OLSV was also the local mission church served by the Sycamore Tree Catholic Retreat Center, a 24-acre property purchased in 1968 near Peck Lake and developed to provide solitude and silence to enter into a deeper personal encounter with Christ.

"I have seen so many miracles of people here in just 24 hours," Jenkins said adding it changed her life when she went on retreat there in 1989. "It is a Catholic apostolate but everyone is welcome."

While separate entities, the Sycamore Tree provides OLSV with the priest and volunteer staff.

"If we had to pay staff we couldn't do either one," Jenkins said. "We have always been self-supporting and just had enough, what we call 'Gospel sufficiency.'"

"They were like our foster fathers. We had continuity, we had stability," Jenkins said. "They loved our community. We were so blessed to have them."

Father Michael Poole served as the pastor from 2009-2012. From 2012-2015 Father John Brown, a hermit priest at The Sycamore Tree, served OLSV as the Sunday celebrant, offering Mass on Sundays.

In July 2015, OLSV became a mission of St. John Paul II Parish in Bigfork, Montana. Their Mass time changed to 10:30 a.m. to 1:30 p.m. on Sunday. They also became a seasonal church only offering Mass from Memorial Day to Labor Day.

"That changed our world quite a bit because people don't want to break in the middle of their day [to go to Mass]," Jenkins said.

Father Craig Hanley served as the pastor until 2019 followed by Father Bart Tolleson.

Jenkins thought if they could return their Mass time to 10:30 a.m. they would increase attendance. Since they were a seasonal church, she felt that they knew enough priests that were committed to them that priest would be willing to substitute through the summer.

She approached Father Michael Drury from Missoula who had just gone on early retirement. After visiting for a couple of Sundays, Jenkins said he appreciated how accepting and welcoming the congregation was and he wanted to help. Jenkins asked him to serve as OLSV's Sunday Celebrant. He agreed and served from 2020 until July 2021 traveling each week and staying at The Sycamore Tree.

"It was a beautiful relationship," Jenkins said. "We went from being a seasonal church back to a year-round church from Mass at 1:30 to Mass at 10:30. Attendance went up and was steady."

Father David Mary Engo, who is currently serving as chaplain at The Sycamore Tree is also serving as the Sunday celebrant at OLSV since July 1. He, along with Father John Wang, Father Michael Drury and Father Bart Tolleson, joined Bishop Austin Vetter and the congregation in celebrating the 25th anniversary of the church's dedication Monday, Sept. 6. Jenkins said it was a very traditional liturgy for the solemnity with sacred music offered by a professional Schola (choir) Kathleen Yeager and her daughters Hanna Bartel and Laura Vander Vos.

"It was beautiful music to glorify God and lift up the people," Jenkins said.

Jenkins said Vetter's homily spoke about the church being on holy ground. It was consecrated and dedicated for sacred worship. It was a place that people come to meet God, have an encounter with God. The church is also a place where people meet God and stop to worship on their pilgrimage to beatific vision.

"We need to really reverence and be grateful and cherish that we have freedom to worship and a space to worship," Jenkins said.

Jenkins said 25 years for Our Lady of Swan Valley Mission is a victory for God.

"There are believers who hang on through thick and thin," Jenkins said. "Even though we are a remnant, we live in a world that is becoming increasingly secular. It is not easy to believe but believers who are faithful to God will help save the world."

She said they would like to see Christians of the Swan Valley come together as united followers of Christ.

"We pray every Sunday for all our neighbors, all our fellow Christians in this valley for God's blessing on the Swan Valley," Jenkins said. "If there are Catholics out there who have drifted or fallen away from the church we would certainly welcome them home or anyone who would like to encounter Christ. Come and see. They would be most welcome in our church."

Jenkins added, "Our hope and prayer for the future is that this church will continue to be a spring of living waters, a school of wisdom where we will learn to put God first, neighbors second and ourselves last."