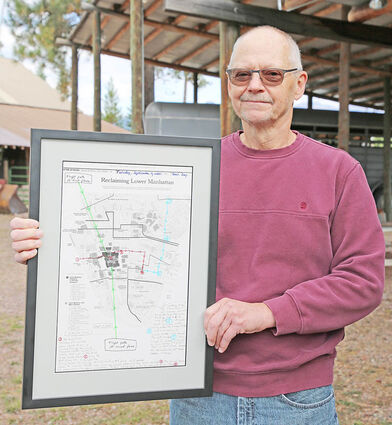 Seeley Lake's Tom Browder survived the Sept. 11, 2001 attack on the Twin Towers. He holds the map of his route and the key events of the day as recreated on a map published by the New York Times Sept. 13, 2001.

This Saturday, Sept. 11, 2021 will be the 20th anniversary of an event that has totally changed our lives and how we look at the world. On that morning back in 2001, I walked through the World Trade Center (WTC) in New York City as I went to my office in Lower Manhattan. Memories from that day are as clear to me today as the skies were on that fine fall day.

As I walked past the bottom of the North Tower just before 9 a.m., I heard a dull boom directly overhead. My immediate thought was how odd it was to hear a sonic boom in an urban area. Half a second later, the top of Tower One exploded in a ball of fire, smoke and debris. As the concussion rolled down the side of the Tower, I was knocked flat on the ground. I immediately became one of thousands of others on the WTC plaza desperately running to escape. It seemed almost surreal to see a daycare supervisor calmly walking her well-behaved young charges down the plaza stairs and across the street to safety.

Once I made it across the street, I took refuge under the scaffolding of a corner delicatessen. The view of the North Tower was one that is seared into my memory. Flames and black smoke were billowing from the upper part of the building and papers from offices were flying everywhere. People above the point of impact were jumping to their deaths, some enveloped in flames.

For a few minutes, my thoughts were that a large bomb had somehow been placed high up in the Tower. I thought the mass of first responders - police, fire, medical and other emergency services - would somehow get control of the situation. Then I caught a brief glimpse of a large aircraft flying toward the South Tower from the other side. I was sure that a fire-retardant plane (familiar to we Montanans from wildfires) was being sent to save the burning North Tower.

How wrong was that thought! The second plane hit the South Tower and scattered glass and debris all over everyone on the other side of the WTC. The scene around me turned completely chaotic. The crowd surged away from the disaster and I was pushed inside the deli by people looking for a back door. After a few minutes I was able to get back to the street, by then almost empty as people ran as far and as fast as they could.

The streets were covered with shoes, mostly women's, where people had literally run out of their shoes. Some of the upper story windows away from the Trade Center site were blown out by the force of the planes' impacts on the Towers. An odd scene still remains with me of an older man, scampering through the street and putting discarded shoes he thought might be valuable in a sack! I made my way to my office, a couple of blocks away, hobbling with a sprained ankle from my initial fall.

When I arrived at my office building a few blocks east of the WTC, I found a confused scene. Many employees had already gone home and others were in the process of doing so. I went down four floors underground, where a former vault was now a series of training classrooms. Remember that in 2001, television - not cell phones - was how we got our news updates. About 100 or so people were clustered around the TV sets in the basement rooms. My boss, upon seeing me limping due to the ankle sprain, suggested I go to the Medical Department. When he said it was on the 20th floor, I said I would live with the ankle rather than go 20 stories above ground!

Looking back, the next hour seems to have passed in an eerily calm way. Scores of us were watching the televisions, as first the South Tower and then the North Tower collapsed. The announcements from building security over the intercom continued to stress staying in place and waiting for more information. Then came another event which made an easy decision for all of us - the smoke and dust from the collapsed Towers started infiltrating our air supply. All of Lower Manhattan was ordered to evacuate immediately. We took everyone from our underground offices up to the ground floor using the elevators rather than the emergency stairs. This shows how unused we were to handling an emergency in a big city!

We were each issued a hand towel to cover our faces and a bottle of water. As we emerged out of the building, the ash cloud made me think of a nuclear winter. It was almost pitch dark, since we were downwind of the collapsed Towers. Already there were several inches of dust covering everything. As thousands of people made their way north on Water Street, things were surprisingly quiet. I was supported on either side by two of my colleagues and I slowly limped to what we hoped was safety.

One of the last images remaining in my mind from that day was coming back into the sunlight. From the dark cloud with its choking dust and smoke, we emerged into the same glorious day that had been so abruptly shattered when the first plane hit. Off to the right, I saw the Brooklyn Bridge looking very different from normal - no longer choked with automobiles, it was packed with pedestrians leaving Manhattan for Brooklyn the only way possible, on foot.

As the crowd moved north through the neighborhoods with small shops and apartments, people huddled in their doorways with radios and TV sets, sharing news as it came in. How many planes were involved? Where were they from? Information changed as I continued my slow, hobbling walk for the three and a half miles to Pennsylvania Station in Midtown Manhattan.

Two more visual memories stem from this walk. A comforting image was the USAF F-15 military jet flying slow circles over Manhattan. Somehow this said to me that things were getting under control. A more heartbreaking image was the sight of doctors and nurses waiting outside the emergency entrance of St. Vincent's Hospital in Greenwich Village. The injured people they were waiting for never arrived, because on 9/11 in New York City there were few injuries. People either escaped or they died.

We reached Penn Station about 2:30 in the afternoon. It was jammed with people wanting to travel home. I found myself on a completely packed train, with some of us pushed up against the car doors, as the train slowly made its way under the Hudson River and into New Jersey. Because many of us were covered with ash and debris, the larger train stations had decontamination tents set up in the parking lots. Even my small station in Bernardsville, NJ, had emergency medical technicians onsite and they put my ankle in an air cast. Since the dust from the Tower collapse could be contaminated by asbestos, we were told to completely undress and throw out everything we were wearing. My wife Carolyn fetched me in short order and we followed these instructions to the letter. This tragic day ended with me cocooned on the sofa, still in shock over what had happened.

The events of 9/11 will continue to move into the past but we must never - cannot - forget them. The events that unfolded that morning were completely different from what we in this country had ever perceived as risks in our routine daily lives. We will always recognize the disaster of that day and mourn those who died. But we will also remember that the recovery and rebuilding from the disaster shows the best of America.

Editor's Note: In honor and remembrance of the 20th anniversary of 9/11 we would like to hear your memories and experiences from Sept. 11, 2001. Please email to pathfinder@seeleylake.com, send a message via our Facebook page or drop off a hand written note in our drop box outside our office at the Bison and Bear Center, Highway 83 or mail to Box 702, Seeley Lake, MT 59868 by Sept. 12. Memories will be posted to our website next week and may be included in print.

Let us never forget the events that happened, both on that day and in the years following. They have shaped our country into what it is today.