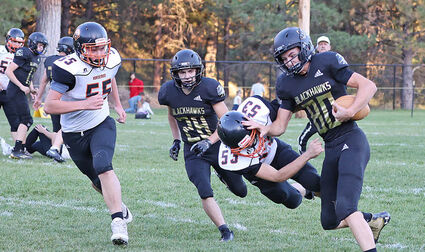 Junior Owen Hoag brushes off a Horseman on one of his 7 carries. He rushed for 106 yards in the game for an average of 15.1 yards per carry.

SEELEY LAKE – The Blackhawks hosted the Plains Horsemen Sept. 3 for their first home game of the season.

The Horsemen kicked off the game with an onside kick. Their attempt to recover the ball failed and the Blackhawks' offense took over at midfield. A play later, Owen Hoag was in for the touchdown putting the Blackhawks up six.

The Blackhawks' defenders had the ball back after a deep kickoff and a bobbled snap by the Horsemen led to a safety, setting the tone for the rest of the game.

The offense marched the ball back down the field for the Blackhawks' second touchdown. This time it woul...