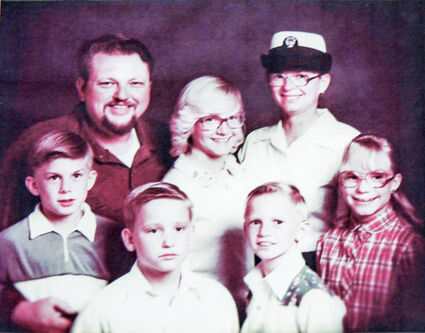 While raising five children, Jodi Stierwalt managed to fit in a two-year term in the Naval Reserve. She is pictured with her family during the time she served. Back (L-R): Danny Sr., Shelby and Petty Officer 2nd Class Jo-Ann Stierwalt (Jodi). Front (L-R): Danny, Jr., Karl, Mark and Debbie.

SEELEY LAKE – Jodi Stierwalt never shied away from big tasks-or big vehicles. An equipment operator in the United States Navy Reserve, her attitude when asked if she could operate a specific piece of machinery was, "I don't know. Let me try."

A self-described Navy brat, Stierwalt is proud of her father who was a World War II Veteran. He survived the Japanese attack at Subic Bay in the Philippines, which occurred shortly after the attack on Pearl Harbor. Stierwalt's tangential connection with the Navy continued when she married a Navy man whose father had also served in the Navy.