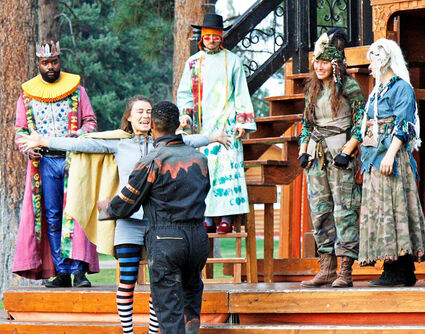 As the complicated plots draw to a close, Imogen, dressed as a boy to disguise her true identity, and Posthumus, now enlisted in the Roman army and serving as a soldier, are finally reunited. Witnessing the reunion are King Cymbeline, Cornelius the physician and Belaria and her daughter Cadwal. Belaria and Cadwal, who offered Imogen the humble hospitality of their cave when she was wandering in the woods, represent the natural world, another subplot of the play. Imogen comments on how much nobler their lives are than those of the nobles in court.

SEELEY LAKE – After a year of epidemic-inflicted hiatus, Montana Shakespeare in the Parks (MSIP) greeted a large audience of eager playgoers on the grounds of the Double Arrow Lodge Aug. 16. The traveling troupe performed "Cymbeline," one of Shakespeare's lesser-known plays. It is also considered one of the playwright's most ambitious and complicated plays, with multiple plots and subplots.

Sometimes classified as a romance, the play portrays the trials of two lovers, King Cymbeline's daughter Imogen and Posthumus the man she has secretly married, though he is beneath her royal station....