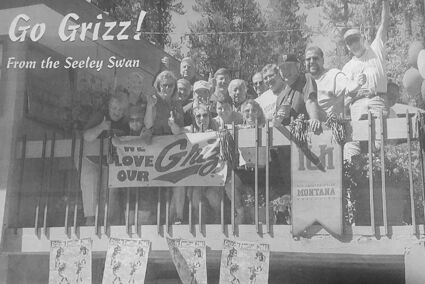 There are a lot of University of Montana Grizzly fans in the Seeley Swan but they probably lacked organization until last Saturday when local tailgaters gathered at the home of Roger and Rhea Johnson to discuss expenses and other heavy topics, including a loose discussion about some kind of name for the group. The group plans on continuing tailgate parties before games where the Grizz take the home field in Missoula. Other business will be considered when the need arises. New members are welcome. The founders, shown from Ieft, are Rhea Johnson, Rachel Vielleux, Nancy Newlon, Beverly White, Roger Johnson, Harry Newlon, Jim Wheeler, Julie Hainline, Tom West, Kitty Logan, Mike Holmes, Jabet Wheeler, Tim Lindeman, Gary Boe, Tony Quadros, Lee Eslick, and Jeff Hainline. Not pictured, but present somewhere is Frank White. To read more visit https://www.seeleylake.com/home/customer_files/article_documents/2001-08-30.pdf

The Ad Hoc Businessperson's Group met last Thursday at Leisure Lodge. Once again, there was an exceptionally good turnout of local businesspeople. The causes for four problems which had been identified at an earlier meeting were addressed. The problems, all affecting local area

• Misdirection of Chamber of Commerce

• Lack of market identification (with emphasis on lack of highway signs)

Richards is proud of the progress made by tennis players in the Seeley Lake community. The courts were built just three years ago. They were completed late in the summer the first season, Richards said, so she didn't begin tennis classes until last summer. She taught again this season....

If you attended the 4-H Fat Stock Sale Saturday at the Western Montana Fair, nobody had to tell you that country kids come out on top for the time and effort they devote to their steers, sheep and hogs. The top steer sold for more than $5.00 a pound; the going market rate is less than 60 cents a pound. Hogs went for up to $11.25 a pound and the top sheep sold for $12 a pound. All of the 4-H livestock sold above current market prices. 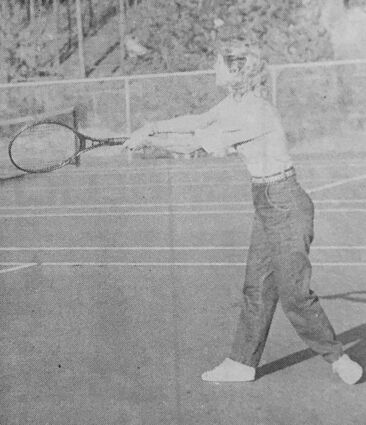 When most people think of 4-H, the steers and hogs and goats quickly come to mind. But, according to Charleen Kubichek, Missoula County Extension Office, woodworking and photography are rapidly gaining in popularity...

Representatives from the Seeley Lake Sewer Board met with Ann Mary Dussault and other county officials, including Commissioner Billy Carey, to discuss findings and procedures for making a Preliminary Engineering Study of the sewer needs of Seeley Lake. This study is a preliminary needs and information study, not a binding action.