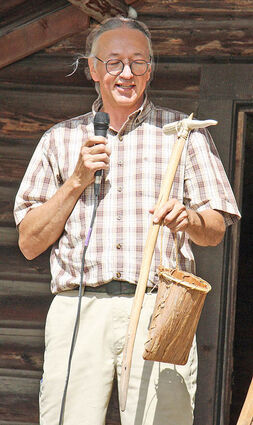 Tim Ryan displayes a traditional Salish digging stick which he described as essentially a crowbar to lever roots out of the ground. Made from heavy, dense oceanspray wood, a plant relatively abundant in Swan Valley, it had an elk handle attached with elk rawhide. The traditional berry basket was made from cedar trees. Ryan said the Condon Work Center has a number of scarred cedar trees on its property. They are still living because the elders said never to cut totally around the tree because that would kill it.

This is the second in the series covering the Roads and Trails Program presented Aug. 7 by the Upper Swan Valley Historical Society (USVHS).

CONDON – Salish Kootenai College Professor and Specialist in Culture and Language Tim Ryan discussed the trails which Native American tribes used when traveling through the region that later became known as the Upper Swan Valley. For the Native people, travel on those trails was intricately woven into the circle of their lives.

Before he began teaching at the Salish Kootenai College, Ryan was an archeologist with an expertise in mapping using the new...