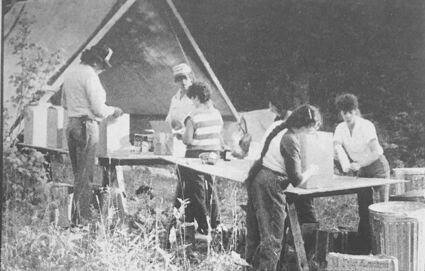 How do you feed 45 hungry firefighters? You order meals catered by the Forest Service cookhouse at the Condon Work Center. Preparing to serve food are (left to right): unidentified bus driver from Browning, Steve Thompson, Melissa Abrea, Dolly Hill, Ramona D. Venegas, and Pam Nord, all from the Seeley Lake Ranger District.

"I started with an unlimited budget ... and managed to exceed it." So said Bruce Vorhauer during an interview last week, when referring to the construction of his year-old palatial home on Sourdough Island. Vorhauer offered the use of the premises, which he has named "Anuka," to the Chamber of Commerce for their general meeting last week. Anuka is derived from a Blackfoot term loosely translated as "Today." "Today" is, of course, the brand-name of the sponge contraceptive product which made Vorhauer's fortune.

The opportunity to tour Anuka proved irresistible for many Chamber members; there was a record turnout. It would be difficult to fault their interest - the home is a marvel of elegance combined with state-of-the-art technology. Vorhauer, tongue-in-cheek, understates the matter by referring to his home as "just another Montana log cabin." The logs were supplied by the Rustics of Lindbergh Lake *who also built the buildings.

Listed below are answers, provided by Vorhauer, to some of the questions most frequently asked about the "Sponge House."

• Will the house be sold? No. It was up for sale at one time, but Vorhauer has decided to stick with his "dream home." The asking price, incidentally, was 7.5 million dollars...

Sixty-four horseshoe pitchers competed in the National Horseshoe Pitchers Association Tournament (NHPA) in Seeley Lake on Sunday. Several other horseshoe buffs from around the state also competed in a money tournament held at the Filling Station on Friday night. That tournament, sponsored by Don Larson, Earl's Distributing, Valley Market, The Gas Haus, Rovero's, The Elkhorn, Coyle's RV, Wilderness Gateway Inn, Seeley Lake Pharmacy and Lindey's, is the biggest "money throw" in the state with a purse of $800, according to Larson.

Highlight of the NHPA tournament was the high pitching percentage thrown by Dean Curry, Lewiston, Idaho, with an 81% game. That percentage means that out of every ten shoes, he pitched eight or more ringers, according to Larson.

There were many veteran "pitchers" participating in the tournaments...

Leita Anderson and her kitchen crews are now serving breakfast, lunch and dinner to about 100 firefighters and foresters. In the past, they have fed up to 200 firefighters and Forest Service workers in the cookhouse at the Condon Work Center. Anderson believes it may be the only cookhouse still operating in the Lolo and Flathead National Forests.

Firefighters on the Inez fire... 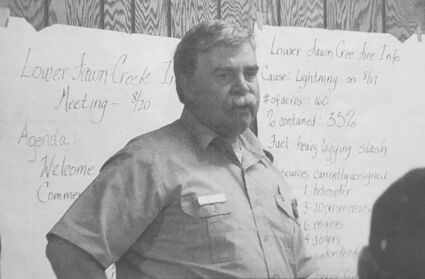 Last Friday's lightning caused several fires, one of which did not flare up until Saturday afternoon. The winds, dry conditions and heavy ground fuel rapidly took the Lower Fawn Creek fire to 120 acres. The fire as of Tuesday evening was at 185 acres.

The fire was a possible threat to the seven homes in the Crescent Meadows subdivision off the north end of Boy Scout Road as well as logging equipment in the area.

The Sheriff's Office notified the homeowners in that subdivision as well as homeowners on Boy Scout Road up to the Seeley Lake Campground that evacuation may be necessary if the fire advanced to the trigger points designated by emergency personnel.

The logging equipment was moved out of the area Saturday with the exception of one dozer that was put to work lining the fire...