Reflections on 40 years of the Swan Lake Huckleberry Festival 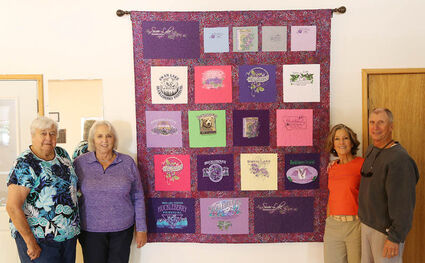 Swan Lake Huckleberry Festival volunteers stand around a quilt made of t-shirts from previous festivals hung in the Swan Lake Chamber and Community Club. From left are Helen Whitney, Lyn Chambers-Bienvenue, Lesly Olsen and Terry Olsen.

Since its beginning in 1981, the festival has taken place on the second Saturday of August in the Swan Lake Day Park near mile marker 72 on Highway 83.

"Whoever picked that date was a genius because we have been blessed every year," said Lesly Olsen, who has been co-organizing the event for the past several years with her husband Terry.

She said the weather has been co...