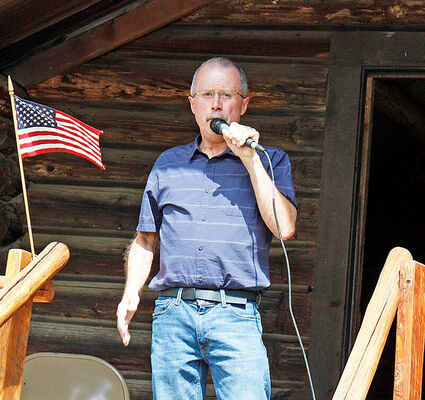 USVHS President Steve Lamar introduced the topic by noting that although Native Americans had been coming through the area for eons, the Upper Swan Valley was one of the later places settled and developed by homesteaders. The main homesteading thrust took place in 1916-1917. One of the reasons it took so long was the lack of wagon-worthy roads.

Lamar further explained in an email, "Prior to the 1890s, roads into the upper Swan Valley were nonexistent. Early travelers came into the area by pack train and saddlehorse, on foot, on snowshoes, or on skis.  Travel by wagon became possible in 1892 when Ovando trapper and surveyor, Charley Young and a crew of five men chopped out the original Swan River Road north as far as Lion Creek. Wagons could navigate the route to the Swan Valley if their axles and wheels could clear the stumps in the trail."

Although the drive from Missoula to Condon takes only an hour and a half today, early accounts from settlers hauling their goods and family into the valley described the trip as a rugged five-day journey. In the early 1900s, the only passable route from Missoula went all the way out to Ovando, then through Woodworth to Seeley Lake and over the Summit into Swan Valley.

Eventually the route was shortened by creating a road around Salmon Lake and later still it was turned into a highway. The highway was constructed in stages. The section from Seeley Lake to Swan Lake was built from 1953 to 1961.

Lamar noted that a number of people in the audience had lived in the area long enough to remember traveling in those early days on roads that were little more than trails. Others had memories of working on construction of the "new" highway.

The Pathfinder will present their anecdotes and trail tales in an ongoing series continuing next week.