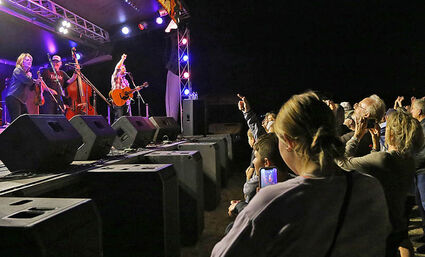 Crowd members cheer on The Bob Marshall Music Festival's Friday headliner The Steeldrivers as they finish off a song. The Grammy winning group hails from Nashville, Tennessee.

SEELEY LAKE - The Bob Marshall Music Festival returned for its fifth year after taking a year off due to COVID-19. Max Pigman, Lewis and Clark Brewing Company CEO and one of the festival owners, said his second year as festival owner went well.

"It was just a really, really fun event and we lucked out with the weather," he said. "I would say [this was] the highest attendance that I've seen in those ... previous years."

Attendance was capped at 1,000 people. Pigman said they had 943 check-ins throughout the weekend with campsite locations selling out. He estimates that they had anywhere fro...