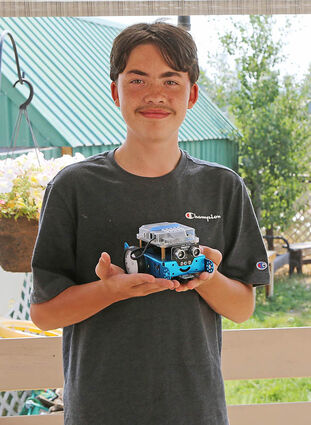 Incoming SLE seventh grader Walter Shields poses with his robot he built and programmed at the National Youth Leadership Forum: Pathways to STEM in Seattle, Washington. The robot is able to dance and follow a programmed pattern. At the forum, Shields learned about robotics, engineering, crime scene investigations and medical procedures.

According to Envision Experience, the organization behind the program, the forum is hosted in over 20 major cities across the U.S. including Dallas, Texas, Chicago, Illinois and Boston, Massachusetts.

In order to attend the program one must be nominated. Walter received his nomination from former teacher Erin Lynch. Nominations are accepted to "honor [students'] maturity, academic excellence and leadership potential."

According to his mother Kristina Shields, Walter's grandparents, Doris and Bob Skiles paid for him to go to the forum. He also received a $250 scholarship from the organization.

According to Walter, his classes were a mix of lectures and hands-on learning. He was taught by one main instructor and a few assistants. His sessions and accommodations both took place at the Seattle Airport Marriott Hotel in Seattle, Washington.

His favorite aspect of the trip was being able to stay in the hotel room although he had some difficulty adjusting to the altitude shift which led to headache.

Kristina estimates that there were about 250 students who attended the camp. Walter said he made some friends while there. However due to the camp restrictions this year, they were not allowed to leave the hotel so they mostly communicated via phone.

The biggest benefit he felt he took away from the experience was learning more about robotics. He enjoyed the construction and coding aspects of it.