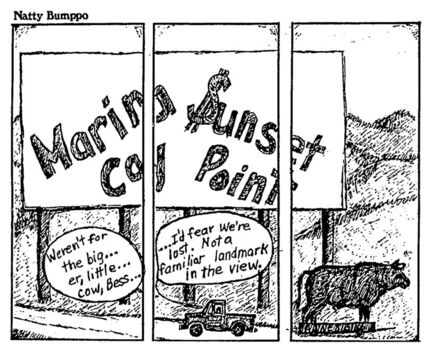 He attended the TAC National Youth Meet in Chicago where he used programs to tally final results of heats for five age groups of competitors, about 1700-1800 kids.

Contestants used to be selected for heats by a "roll of the dice" to determine what lane and heat they would run. Sikkink's computer program randomly selects names automatically. "It takes out some of the tedious work," he said.

There's a lot less confusion with computerized results, Sikkink pointed out. Results of heats are printed, (not handwritten), posted and, with the computer, corrections have been made prior to posting. The computer sheets are easier to read than the "heat sheets."

Cooney Lookout - Firewatch for the Swan

Pete Klein came to the Swan Valley in 1961 to take a job at the Cooney Lookout tower watching for fires during the summer. Twenty years later, after the hot fire season of 1981, he quit his seasonal position with the Forest Service.

"Wait for fires, that's what you do (on a lookout)," Klein said. Once he was familiar with the routine of scanning the valley for smoke, the job provided "a fantastic opportunity for reading books," Pete reminisced.

Over the years there have been several lookout towers in the valley, including one on the peak north of Holland Creek, one on Sunset Ridge (Summit) and Napa Peak at the North end of the Swan Valley. Napa Peak is still manned during periods of high fire danger. The others have either fallen down, burned, or been torn down because they were no longer safe.

During the sixties, the manned towers in the Swan Valley included Cooney, Elbow (near Lindbergh), and Jim Lakes. Elbow and Jim Lakes towers were torn down in the seventies. The original Cooney Lookout...

Before the rocks get too big over this seemingly sensitive issue, I would offer a perspective or two.

A. Feeding or attracting big game animals in this state is illegal.

B. It is also unethical and immoral.

C. Feeding birds in this state is legal, ethical, and moral.

When one puts out hay or grain for the deer, in the wintertime especially, it is usually done with a kindness of heart and spirit, as if "in the best interest of the animals."

Oddly, it turns out maybe not. By attracting deer to one's yard, it also attracts the things that eat deer. In this neighborhood, those things are called mountain lions. Lions eat deer, Fido and small children. "Oh my God, there's a mountain lion in my yard." You did that all by yourself, and now a mountain lion dies needlessly. What about your neighbor's child? Not my kid, not my worry?

Feeding deer may attract them from the other side of the highway. Locally, I know who feeds deer or not, by the number of road-killed deer I pick up at certain crossings. One can easily conclude that feeding deer kills more than it helps locally...