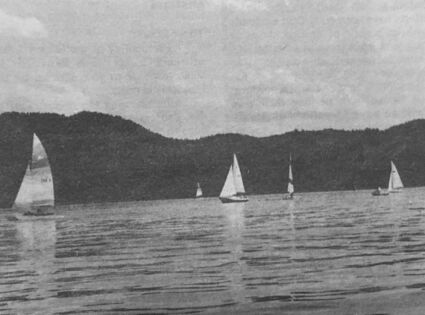 Sailboats and catamarans compete in Driftwood Classic in 1986.

The 18th Annual Driftwood Classic was held last Saturday at Placid Lake. The gathering is "an annual habit of the Placid Lake sailors," according to Kelly Burgess, Placid Lake.

The event, according to Eileen Watson, Swan Valley, was started by her aunt, Dorothy Burgess Allison, as a way to "keep all of us kids busy during the summertime" on Placid Lake, she laughed.

The driftwood trophies for the Classic are traditionally handmade by Placid Lake youths. There were three boats 18 years ago in the original event: Allison's, Fulton's and Stadler's. Last weekend about 25 sailboats competed in the event.

The overall "Grand Champ" traveling trophy was awarded to John Masar, age 12, who competed in the wind surfer competition. Due to light breezes Saturday, wind surfers were on the lake for about an hour and forty-five minutes before crossing the finish line.

In the area of law enforcement, Stevens recently stated in a telephone interview that "there is no request in this year's budget for a deputy in that area (Seeley-Swan-Potomac)."

However, Missoula undersheriff, Greg Hintz, disagrees. He pointed out that the request for another deputy in the Seeley-Swan area was included in the FY87 budget proposal, which outlined a three-year program for hiring more deputies and administrative personnel. He said that last year's request from the Sheriff's Department to the County Commissioners was similar to FY87.

"We almost got another deputy up there last year," he said. But to place another deputy here would require the purchase of an additional four-wheel drive vehicle, Hintz said. Last year the county "moved the morgue," which cost $20,000 - money that could have been spent on a vehicle, he said.

So you're retired, ready to kick back, put your feet up, and rest awhile. What do you do? Buy an RV, head for Seeley Lake, park in one of the most beautiful campgrounds in the world, and clean toilets.

Forest Service Campground Hosts are volunteers who live in a campground and monitor its use. Along with cleaning toilets they provide many services that help vacationers have a pleasant camping experience. 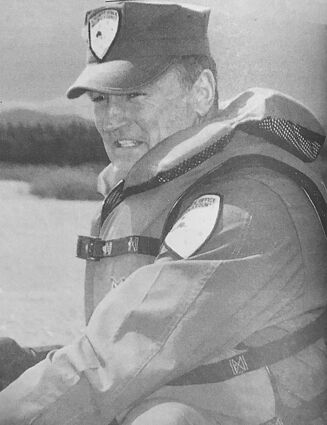 On June 29, 2001, Senior Deputy R.E. "Bob" Parcell was recognized by the American Legion as "Montana Law Officer of the Year." Deputy Parcell was honored at the State Convention at the Great Falls Holiday Inn and was presented with a plaque denoting this award. To read more visit https://www.seeleylake.com/home/customer_files/article_documents/2001-08-02.pdf

Eleanor Cooley, Hilda Barrett and Shirley Herrick manage Seeley Lake Campground. Eleanor is originally from Victor, MT, but now spends her winters in Georgia. She has been a campground host for eleven years.

Hilda and Shirley are from Florida. This is their second year to be hosts.

Jack and Barbara Meek manage River Point Campground. They are from Missoula, but now spend their winters in Arizona where they "go to play." They are also in their second year as hosts.

Dick and Pat Tullar and Earlene Turnquist manage Alva Lake Campground. Dick and Pat are most recently from Minnesota, but now winter in Arizona. They have been hosts for seven years, five of which have been in Seeley Lake.

Earlene, the "Latrine Queen" hails from Missoula. She is in her first year as a campground host.