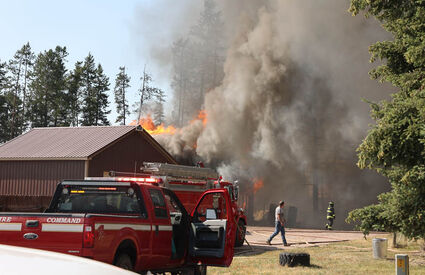 SEELEY LAKE - At approximately 4:30 p.m. Thursday, July 22 firefighters were called to a structure fire on Juniper Drive in Seeley Lake. When they arrived multiple structures were involved and neighbors and community members were working to keep the flames from spreading using garden hoses. Everyone was evacuated and there were no injuries.

Due to winds and high potential to spread, Missoula County Sheriff's Office implemented an Evacuation Warning for Seeley Lake residents from Highway 83 up Redwood Lane east to Badger Court and from Redwood Lane north on Spruce and Tamarack Drive to Cottonwood Lane. Residents were asked to be ready to leave at a moments notice.

There were two homes lost in the fire, Karmen and Ryan Braulik and Kevin Kelley and his girlfriend Stacie Ledford's home. The cause of the fire is still under investigation.

There are several ways to donate.

• To donate cash or checks:

- For Kevin Kelley and his girlfriend Stacie Ledford cash and checks are being accepted through Faith Chapel. Please make checks out to Faith Chapel and either include a note or indicate on the check it is for Kevin and Stacie. This can be dropped off at the church, north of the Community Hall on Highway 83, in the lock box mounted on the north end of the building in the upper parking lot by the back door or mailed to Faith Chapel, Box 243, Seeley Lake, MT 59868.

• Via Go Fund Me online - There are three separate accounts.