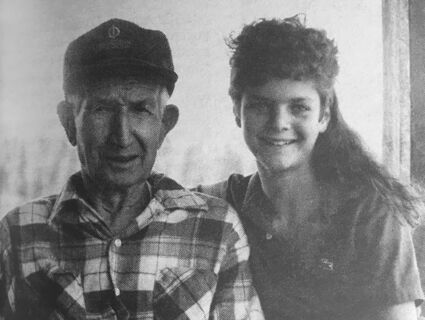 Pete Rovero with his granddaughter Tanya.

Pete Rovero - adding up his real age doesn't tell his story. His active life today would probably be enough, but his past - a past rich in unusual experiences and colorful relationships is of a time so recent, yet so completely different.

Born in Italy, the Roveros (mother, father and son, Pete) came to America and landed in New York in 1904. Pete's early childhood was spent throughout the Northeast as his father played, conducted and taught at various musical halls and opera houses. Although efforts were made for eight years, red tape prevented Pete from gaining U.S. citizenship.

The Roveros headed west, and in Glendive the Rovero family played in a theater. Then, it was in a nearby town, Day, that Pete Rovero abandoned his drumsticks and learned the skills of being a cowboy when he took a job sheepherding. He received 50 cents a day in winter and $1 a day in the summer and became associated with three other cowboys who roped coyotes as well as antelope!

At age 17, Rovero went to work in the mines in Butte. For four years he worked the different mines and learned the determination of strikers. "I didn't know what a strike was. I went to work one day and ended up looking down the barrel of a pistol; the hole in that pistol looked BIG. I was told I was not going to work and I turned around and said, 'OK, I'M NOT!"

Rovero had two uncles come into the Seeley-Swan Valley and begin homesteading. In 1915, Pete's mother, then divorced, moved her clan of four to the site of the present Barry Seaman Ranch and began homesteading the 160 acres of land. Twenty acres were cleared and the deed to the Rovero homestead was official.

The Montana Fish and Game Commission approved tentative grizzly bear hunting regulations for this fall in portions of northwestern Montana at its June 26 meeting in Helena.

The tentative regulations adopted set a quota of 14 grizzlies that can be killed by hunting or other human activities, according to William Phippen, Helena DFWP.

The tentative regulations also set a combined sub quota of six female grizzlies for the entire area to be hunted. This area, known as the Northern Continental Divide Ecosystem, comprises

Two full-time Seeley residents and one seasonal firefighter from the DNRC Clearwater Unit received awards for their efforts during last year's fire season at the awards ceremony held July 3rd at the Clearwater Unit.

Howie Kent, who has worked in the Seeley area for nine years, received the Blackfoot Forest Protective Association (BFPA) Award, which included a plaque and $1,000. 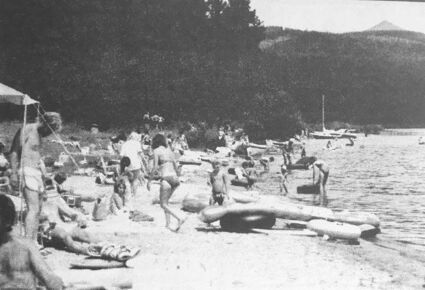 Kent is a Senior Engine Boss, and has been with DNRC for 11 years.

"He performed as Incident Commander on 13 fires, 5 of which were type 3 complexity.

"He was assigned to take command of the Strawberry Ridge fire when it escaped initial attack. His excellent use of retardant, helicopters, dozers and engines stopped this fire just as it was becoming a major threat to the town of Seeley Lake.

"He faced the challenge of a shortage of resources, and Howie was a master at contingency planning. I believe that he was an obvious choice for the BFPA Firefighter of the Year award for 2000..."