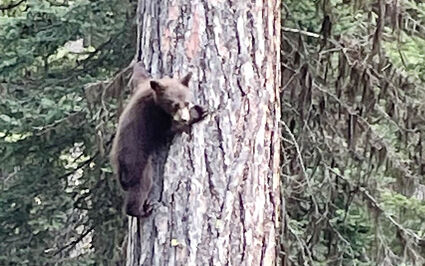 A bear cub climbs a tree at River Point Campground. Montana Fish, Wildlife and Parks (FWP) Bear Specialist Jamie Jonkel said he has seen an increase in the number of bear cubs abandoned by their mothers this year although he does not expect this to have a long lasting effect on the bear population as a whole.

SEELEY LAKE - Montana Fish, Wildlife and Parks (FWP) Bear Specialist Jamie Jonkel said he is confused by the recent number of local mother bears abandoning their cubs either permanently or temporarily. This year in Seeley Lake,  he believes six cubs were abandoned. While the cause is unclear, most of the cubs were reunited and Jonkel sees no real long term effect on the bear population.

According to Jonkel, cub abandonment usually only happens on rare occasions when the area's wildlife is experiencing an overall food shortage throughout the year. Occasionally sows will also abandon their c...